Newcastle has secured a 1-1 A-League draw with the Central Coast Mariners after Dimi Petratos equalised with a retaken penalty.

Central Coast coach Alen Stajcic believed all saved penalties will be retaken this A-League season if officials are consistent with their reviews after Newcastle's equaliser in a 1-1 draw on Saturday night.

Dimi Petratos levelled from the penalty spot, at a retake, in the 56th minute to cap a drama-charged four minutes in the round-two clash at Central Coast Stadium.

Central Coast's Giancarlo Gallifuoco handballed in an aerial contest in the box, but Petratos' initial penalty shot was denied by former Jets keeper Mark Birighitti with a dive to his right.

The save, though, was reviewed and replays found Birighitti had come off his line.

Petratos stepped up again and this time beat Birighitti to the same side.

"I remember asking the question about how pedantic they were going to be about that," Stajcic said, when asked about the retaken penalty.

"They've made a call that he went off the line. Just as long as they do it every single time now, eh?

"If a keeper saves it, every single pen will be retaken I think because I can't remember one where they've kept their foot on the line and saved it, so it's just the way it is. That's the rule.

"Again, I didn't see how far. I only saw a quick replay, and apparently he was off the line a little bit before it was taken."

Both coaches were happy with the performances of their side but Jets boss Ernie Merrick, who has criticised how VAR is used, was not commenting on the crucial retake review.

"I refuse to answer any questions on the VAR on the grounds that I may incriminate myself," Merrick said, with a laugh.

The round-two draw came after the Jets had the opening week bye.

The Mariners had led in the fourth minute with a quality strike from Serbian Milan Duric.

Duric, who scored in the Mariners' opening round 2-1 loss to Wanderers, put Jordan Murray in behind with a long pass then followed through to bury a volleyed shot off a chipped cross back from his striker.

Central Coast fans thought they had a penalty for handball against Johnny Koutroumbis in the 18th minute but it was cleared on review.

Newcastle edged Mariners in first-half possession put the hosts held firm and restricted the Jets to only one shot on target at half-time.

Duric nearly made it 2-0 in the first minute of the second half but Jets keeper Glen Moss was at full stretch to deny his stinging free kick.

The Jets threatened with a crisp, hip-high strike from former Mariner Matt Millar in the 74th minute but Birighitti made a quality reflex stop.

Duric almost had the final say but his long-range strike in the 90th minute was denied by the woodwork. 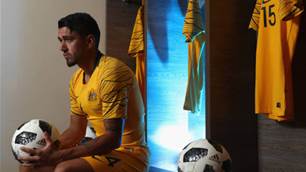