Wellington Phoenix coach Mark Rudan has hailed his history-making side after they battered Central Coast Mariners 8-2 on Saturday night.

The Kiwi outfit is turning into coach killers with Mariners boss Mike Mulvey axed overnight. Earlier in the season John Aloisi resigned his post when Brisbane Roar were humbled by the Nix.

The result sees Rudan’s men grab fourth place on goal difference and puts paid to talk that Wellington have run out of puff heading into the home straight.

“The expectations have grown since the start of the season because of what we are doing,” Rudan said post-match.

“It’s another record, it’s another bit of history created again. We got 23,000 in Auckland which was a record, we went 10 unbeaten – a record – and again tonight we scored more goals this football club has ever before. We keep chipping away.”

With the Nix storming towards a home final Rudan called on Nix fans to respond in numbers and pack the stadium for their last three home games of the season.

“I think tonight gave you the answer about what we’re about," he said. "There was absolutely nothing that’s going to stop us or get our way this season.

“A lot of neutral fans out there who enjoy watching our football team play – a dynamic brand of football. We’re at home next week and we’re looking to fill that stadium and get it loud and rowdy and we want big numbers.

“We just want the fans now to come out in big numbers, with three home games remaining in Wellington, to get right behind the players because they’re doing their bit.”

Rudan praised his players' killer streak and could be heard on the sideline calling for them to be more "ruthless".

And despite some bright opening exchanges from the home side they went down to a Sam Graham own goal in the 8th minute before the flood gates opened.

Jack Clisby (61') and Stephen Mallon (69') clawed two back for the Mariners, but it was little consolation.

Despite the avalanche of goals it was a missed opportunity that said everything you needed to know about the tigh-knit Nix, Rudan said.

Late in the match substitute Cillian Sheridan, who was on goal, passed to Krishna who was sweating on a hat-trick.

Rudan added: "That moment in particular tells you everything about us as a football club. We are together, we’re a team, it’s a team effort.

"Cillian easily could have got his first for the season, for the football club, he was desperate to get his first and yet he still tried to put it on a plate for Roy because it was about somebody else." 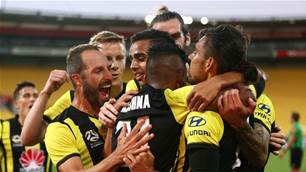