A report card for each of the Matildas at the end of the group stage as they turn their attention to their first knockout opponent: Norway.

If all goes to plan, this is the half-way point of the tournament, with three games down and up to four remaining.

Here's a look at how each player and coach Ante Milicic has fared ahead so far in France.

Australia's No.1 should have saved Barbara Bonansea's dramatic winner back in game one and has yet to keep a clean sheet. Williams has stood up during the periods when the Matildas have been under the cosh.

Superb leadership at the back after losing her regular defensive partner Clare Polkinghorne. Might have had a goal against Jamaica, rattling the crossbar late.

Finding her way into the tournament after a disrupted build-up and position switch. Flat-footed for Cristiane's goal against Brazil and battled with Khadija Shaw but will be better for it.

Australia would benefit from Carpenter adopting a defence-first mentality, but how do you put the brakes on such a talent? Has shown super drive from right back.

Walked a fine line against Italy's pacy forwards, then blundered to give them a foothold in the game. A hamstring injury has kept the veteran out since then, but plenty of time to redeem her tournament.

How else to rate a player with no Matildas experience and not even in the squad two weeks ago - but now has two caps to her name? Competed against Jamaica and helped Milicic rest Elise-Kellond Knight.

Coming in with injury, the Milicic favourite did a job against Brazil when she had "no right" to finish 90 minutes. Now has a platform to kick on; whether it's in midfield or defence.

The biggest conundrum in the Matildas lineup. Van Egmond boasts great experience and is a trusted figure but needs to place a higher premium on retaining possession. Her long balls have been dangerous.

A tireless worker in midfield, Yallop has taken an almighty kicking and sat out the Jamaica game as a result. Despite Katrina Gorry and Elise Kellond-Knight in the wings, Yallop seems first-choice.

It's fair that expectations are low on Gorry, who has endured a torrid run with injuries and form in the build-up to this tournament. Can build after starting against Jamaica.

The breakout star of Australia's campaign thus far. Busy against Italy and Jamaica but best afield as the Matildas mounted their stirring comeback against Brazil.

After five minutes against Jamaica, the 34-year-old can at long last say she's played at a World Cup. Has been secondary to Chloe Logarzo in Milicic's plans.

Arrived in France as the all-time leading goalscorer in the Australian and American leagues but with doubts about her ability to perform at a World Cup. Any more questions?

Kerr's preferred partner in crime has been a fantastic foil to the Australian captain. Scored the crucial first against Brazil and can give Kerr a chop-out centrally when needed.

Combining well with Carpenter with a super combination of swiftness and passing. Her run was crucial for Kerr's third goal against Jamaica when the Matildas' ship was rocking.

Australia's best crosser in a team that loves to cross, you sense that Gielnik can only come into the tournament more. Needs to use her physicality more often.

Ever-so-slightly out of sync with her teammates in two outings to date, but De Vanna still has the chance to become the first Australian to score at four World Cups. Bench roles from here in.

Given the effort that went into scouting and preparing for the Italy match, the Matildas gave up far too many chances. But got it right against Brazil by re-jigging his defence and sticking fat with a Yallop-Logarzo midfield combination that ran the show. Has earned shoutouts from several players; he clearly has the full-blooded support of the team. 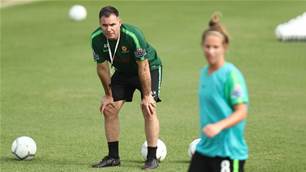 How the Matildas can still go top – or go home