The Matildas are marching on in France, turning their attention from Sam Kerr's goal glut to their next World Cup opponents, Norway.

Kerr's astonishing four-goal salvo in Grenoble on Wednesday night helped the Matildas beat Jamaica and sure-up second place in the group by the finest of margins.

It took Kerr's fourth strike to push Australia to an equal goal difference with Brazil, edging the South Americans on goals scored.

No matter how thin the margin, and despite coming in as top seeds, goalkeeper Lydia Williams says finishing second equals success.

"It's mission accomplished. If we finished third we'd be playing against France or Germany," she said.

On Thursday (AEST), Ante Milicic's side flew south to Nice where they'll play world No.12 Norway on Sunday (AEST).

Chloe Logarzo said "100 per cent" the Matildas had dodged a bullet by avoiding a probable meeting with the hosts.

"We are happy that we didn't come third. We just need to recover well and look forward to Norway," she said.

"As soon as the game ended we all looked over to the bench, asking how the game was going, we kept saying end, end when it was 1-0.

"They didn't tell us during the game how the score was going."

Now that they are through, Williams said the Matildas needed to take lessons from their opening three matches without replaying the matches in their heads.

"If you reflect too much on the past you're not going to get through in the present and the future," she said.

"We're through to the round of 16 and we have to put all our focus into the next game."

Thursday morning's results also put England, as Group D winners, into the same quarter of the draw as Australia, meaning the Matildas could face Phil Neville's side if they both win their round of 16 clashes.

"Though we haven't beaten them yet so there's a bit of a salty taste on that. It's definitely first game first."

In Nice on Sunday (AEST), Australia will be taking on a strong opponent, but not one as strong as they could be.

Leading talent Ada Hegerberg, the reigning Ballon d'Or winner as the world's best footballer, isn't at the World Cup as she protests against the Norwegian federation over conditions for female players.

Additionally, recent Barcelona signing Caroline Graham Hansen is set to miss the match after an ankle injury in Norway's last out defeat of South Korea.

European-based Matildas midfielder Aivi Luik said Australia would have their work cut out for them to reach the quarter finals.

"It's knockout stages so everyone's going to be full throttle."

Lydia Williams' journey: From 'growing up in the desert without shoes' to aiming for Europe 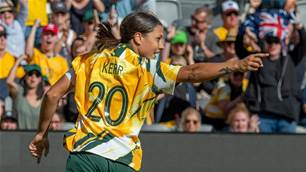