A crowd of 35,439 fans came to Australia’s 7-0 win over Tajikistan at the same venue in March last year which had McGowan pumping up his hometown to host more international games.

The attendance for the World Cup qualifier against Saudi Arabia was criticised on social media, given the fact Adelaide Oval can accommodate just over 53,000 fans, but McGowan thought the attendance was actually good.

“I think 30,000 in Adelaide… it’s a small place, Thursday night and it wasn’t the best weather and they were really into the game,” McGowan said.

“Sometimes you can get 50,000 and they’re a little bit distant, but every decision they were on it and as an Adelaide boy I’d never slag it.

“It’s a great occasion and it now shows Adelaide it just starting to get good games, big games and hopefully more to come.”

McGowan was a late inclusion in the team after Bailey Wright was omitted due to a back issue and featured in a back three for the first time in his international career.

The 27-year-old joked that Wright’s “bad haircut” was one of the reasons why he did not get in there, but says his team-mate still has tightness.

McGowan admitted it took the Socceroos a while to get going at the start against Saudi Arabia and felt the second-half was an improvement, even though they'd scored twice before the break.

Tom Rogic fired home the winner in the second-half and McGowan disputed suggestions it was a somewhat fortuitous victory. 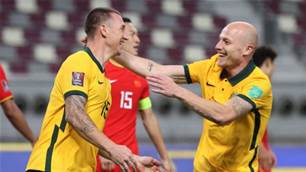