Adelaide United defender Dylan McGowan has been linked to a move to Portugal's Primeira Liga.

McGowan, who joined the Reds in 2014, is off-contract at the A-League club and expected to leave in the off-season.

He has made more than 80 appearances for United and was a crucial part of their double-winning campaign last season.

FourFourTwo understands McGowan is set to move to the Portuguese top flight.

Pacos de Ferreira is believed to be interested in signing the centre back.

McGowan, who is a free agent, has previous European experince with Hearts and East Fife in Scotland.

The 25-year old, who is the younger brother of Socceroo Ryan McGowan, has represented Australia at Under-20 and Under-23 level.

Adelaide United is set for a major overhaul with the head coach departing and more than half of the squad off-contract. 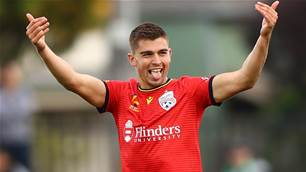