The 18-time international received his marching orders for handballing a goal-bound effort in the 88th minute, capping a forgettable 3-0 defeat against Andre Villas-Boas’ star-studded hosts.

Guizhou have won just one of their opening eight matches this term.

In Germany, Socceroos speedster Mathew Leckie was withdrawn at half-time of Ingolstadt’s 1-1 draw with Bayer Leverkusen.

Leckie was replaced to avoid a potential second yellow card, with the home side going on to give up a costly equaliser in their bid to stay in the Bundesliga.

Australia teammate Tomi Juric suffered defeat in Switzerland, beaten 3-1 at FC Thun after coming on as a 61st minute substitute.

Luzern have now lost three on the trot to sit fourth, enough for a Europa League qualification spot. 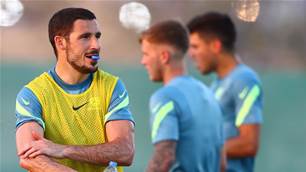