FourFourTwo understands McGowan's agent Buddy Farah is with the former Adelaide United man ahead of confirmation of the move.

McGowan previously attracted interest from an unspecified Korean club before opting to join Pacos Ferreira in May.

The 26-year-old central defender has fallen out of Socceroos reckoning having made only one five-minute first-team appearance in the cup for Pacos Ferreira.

McGowan had made his Socceroos debut against Brazil in June and was part of Australia's Confederations Cup squad.

The switch is likely motivated by McGowan's desire to be part of the Socceroos squad at the 2018 World Cup.

According to Portuguese reports, McGowan will sign a loan deal with an Asian club for the remainder of 2018.

The ex-Adelaide United man's brother Ryan currently plies his trade in the UAE with Al Sharjah and has previous experience in China with Shandong Luneng, Henan Jianye and Guizhou Zhicheng.

Back in May, upon his move to Portugal, Dylan said: “I had bigger money offers from all over Asia, most notably from Korea but I wanted to give myself a really good chance of making the Socceroos and show that ambition that’s required to be in the national team.

"So hopefully this move can put me in the window for that and then I can play well enough to get that chance." 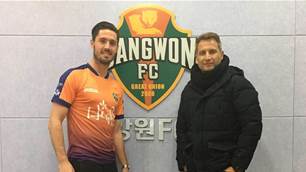