UPDATED FTBL has named our first five coaches. Who will round out our top 10 coaching talents for the second division?

We don’t believe being a former Socceroo gives a coach an instant right to a second division coaching role.

There is a large talent base in the NPLs, proving themselves at the NPL coalface week in week out.

The second division by rights should be for those who are on their way up from the NPL. 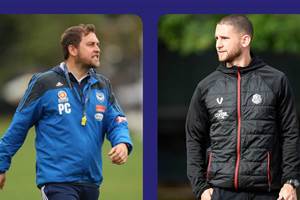 Meet Australia's top 10 coaches for the second division Part I

FTBL believes in the quality of Australia’s coaches. But with such a small number of A-League clubs opportunity has been frustratingly limited: Enter the second division.

Here are the final five coaches to round out the top 10.

And Keelan Hamilton at New Lambton FC could well make the list in 2020.

Zane, right now, however, is a no-brainer.

Some astute observers believe if he was coaching in the higher-profile Victorian NPL, for example, he would've already been on the A-League radar.

Zane is a legend at clubs like Edgeworth with multiple titles. Limited opportunity means he’s still in the NNSW NPL.

The second division is where Zane should be in the next stage of his progression. How far he goes is up to him, but the experience he’s gained will be invaluable.

You can’t say he hasn’t done his apprenticeship.

“Critto” was born to coach.

His achievements at NPL level - and versatility - are astounding. Check this out.

Fans will remember him as the mastermind behind the Demons’ FFA Cup runs in recent years (the Danny Choi wondergoal jog your memory?)

Only around 40 years of age, Crittenden is the sort of coach who could set up the structure and build a club around his philosophy with is wide experience coaching juniors, youth, and seniors.

A perfect choice for the second division and with so much experience, he fully deserves his chance to build a new dynasty in the pro ranks.