The 25-year-old was born in Sydney before moving to the United States at the age of 10.

He returns to Australia to play in the A-League for the first time.

After developing as a central defender in America, the 193cm defender joins City from United Soccer League (USL) club FC Cincinnati and commenced training with Warren Joyce’s side this week.

“Harrison is a player we believe will make a positive contribution for Melbourne City. He has impressed as one of the USL’s best defensive players for the past two years and his performances have made him a target for several MLS clubs," he said.

"We have a desire to develop Harrison and we believe he will bring an important presence to our backline as a composed and strong defender.”

Delbridge initially progressed through the Capital Area Soccer League (CASL) as a youth player in North Carolina, and later through the American college soccer system at Appalachian State University.

He signed his first professional contract with Sacramento Republic in March 2014, before transferring to Portland Timbers 2 and eventually FC Cincinnati in 2016.

Delbridge said he was ecstatic to be joining City.

“As soon as the opportunity came up to play for Melbourne City, I was really excited," he said.

"To be a part of such a talented squad and learn from an experienced coach like Warren is the ideal situation for me to develop and grow as a player at this time in my career.

"I am looking to settle into Melbourne as quickly as possible and train hard with the team.”

Delbridge will be available for first-team selection in January 2018, once the transfer window re-opens. 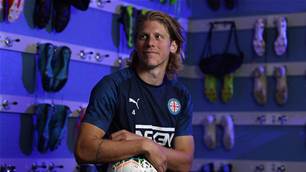