James Meredith has revealed how a close friend talked him out of retiring last year, with the Perth Glory defender now eyeing off a dream Socceroos recall.

Meredith was planning to quit football after being unable to find a new club in the English Championship once his time with Millwall ended.

But his close friend Richard Rudzki convinced him otherwise, telling the 31-year-old he was simply too young to quit.

This time, he helped bring Meredith back to Australia - more specifically under Tony Popovic at Perth Glory.

It's been a dream move to date, with Meredith's hot form putting him on the radar of Socceroos selection.

Meredith, who is living in the beach-side suburb of Scarborough in Perth, is glad Rudzki convinced him not to retire.

"I believed I was a Championship player and there were no Championship options, so I guess it was a bit disheartening," Meredith reflected.

"I was really happy with what I had achieved in my career, and I was actually in the process of retiring.

"But then Richard said, 'Listen, don't retire, you're way too young to retire. Come back to the A-League'.

"He's someone I've been very close to for many years. He's someone that I trust. So he actually convinced me.

"I'm really happy, I made a good decision. I'm so glad that Richard was able to open up that opportunity, and I'm loving playing in the A-League."

Meredith has two Socceroos caps to his name, and was an unused member of the 2018 World Cup squad.

The talented left back hopes another chance will come calling, and former Socceroos goalkeeper Mark Bosnich is urging Graham Arnold to include Meredith in the next national squad.

"That's nice to hear from someone who is as well regarded as him and had such a great career," Meredith said.

"I'm going to do my best and we'll see what happens. I'm not banking on it, but I wasn't banking on going to the last World Cup and it just sprung up on me when I was playing well for Millwall, so it can happen.

"I'd love to win something with Perth, that's the aim first and foremost. And then if I get a call-up, that would be fantastic."

Glory's club-record six-match winning streak has seen them rocket from last into third spot on the ladder.

They will jump into second if they can beat Melbourne City at AAMI Park on Saturday. 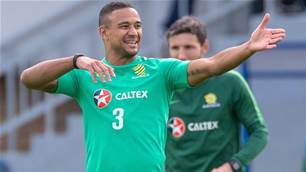 Glory to be patient with Socceroo Meredith 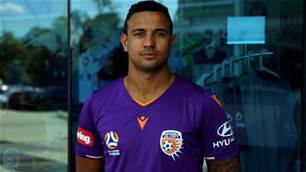