Ernie Merrick believes a lack of goal-scoring power and a combination of injuries led to his sacking at Newcastle Jets.

Merrick was axed on Monday after Newcastle were spanked by Melbourne Victory.

The Jets are at the bottom of the A-League ladder and have only won two games this season.

The club has only scored 11 goals from 11 games, the second-worst in the competition, with only the Mariners lower with a return of 10.

With Newcastle struggling financially, Roy O'Donovan left to join Brisbane Roar in the off-season and winger Joey Champness headed to America to pursue a music career.

New recruit Wes Hoolahan has not played a single game through injury, while striker Abdiel Arroyo has been limited to only five games with a hamstring factor.

Merrick says these factors had left his squad very limited up front.

"There's no doubt our major issue was up front, up at the pointy end of the team when it came to scoring goals," he told NBN News.

"We were scoring nearly from set plays and very few from open play. Overcoming that was difficult. Not being able to sign Roy O'Donovan became a major issue, and that was a financial thing.

"To compound that, Joey Champness has become a big miss. With Arroyo, Wes and those two it's been tough up front.

"But I get the feeling we were on the right track, we get those players back and we still have 30, 40 points to fight for and still a good chance of making the finals.

"But I still let the fans down. My decision-making against three very tough clubs, and losing games badly, I know the coach pays the price for that and it ends in tears.

Merrick described as "nonsense" talk that he had lost the dressing room.

"They should speak to the players," he said.

Merrick has been coaching in Australia since 1979 and has led Melbourne Victory, Wellington Phoenix and Newcastle in the A-League.

But at 66 the Scotsman admits he is unsure what the future holds for him now after leaving the Jets.

"I haven't really thought that far," he said.

"It's going to be a hard act to beat this town and this club and these fans who are tremendous. I don't know what the future will hold but I will probably take a bit of a break." 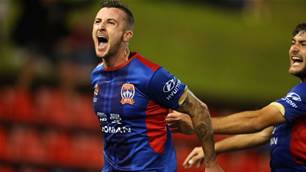