Mark Milligan admits he was disappointed to leave Scottish club Hibernian unexpectedly, but is thrilled with his move to League One club Southend United to fulfill his career-long ambition of playing in English football.

Milligan spent just one season in Edinburgh with Hibs after arriving from Saudi club Al-Ahli. The Socceroo skipper impressed in Scotland, making 31 appearances in all competitions.

But in May with the arrival of new manager Paul Heckingbottom, he was surprisingly released and has since inked a deal in England with Southend.

Milligan admitted Hibs’ decision to let him go was "very difficult" to process.

"It was disappointing, but obviously with the new gaffer coming in he had the chance to rebuild," he told FTBL.

"While it was very difficult to accept, I did understand he had a longer-term plan and with my age and the salary I was taking up there, I offered him a chance to, I guess, rebuild by leaving.

"So it was a little tough to take but I can see where he’s coming from and I thoroughly enjoyed my time under Paul and at Hibs."

Milligan has always harboured a desire to ply his trade in England and previously has seen potential moves to Crystal Palace in 2013 and to Bolton Wanders in July 2017 break down.

But now the midfielder finally has his wish of experiencing life in the English system, as well as the lure of a future coaching role with the Shrimpers once he hangs up his boots.

"This is the environment that I always wanted to be in. To be totally honest, the way that I look at is  one door opens as another closes.

"By me taking this move hopefully a little bit down the line the next door will open for me in the next phase of football [in terms of coaching].

"But first and foremost the discussions were about playing football. That’s what I’m still doing at the minute.

"There was a few things I was weighing up, but the lure of being able to play so many games and to be able to play under a manager like Kevin Bond who has been around for quite a while and has a great deal of experience that I think I can still learn from as footballer.

"That was a big plus for me. I didn’t want to come to England get lost in the system in this late stage, but I do have one eye towards the future and this offered me the best of both worlds, which doesn’t often come about." 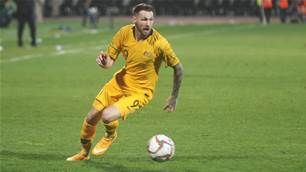