Mark Milligan has called on his Hibernian teammates to stand up and be counted to halt the Scottish club's slide.

Hibs have lost their last three games, suffering a 3-0 defeat to Kilmarnock on Saturday.

The Edinburgh side has slipped down the Scottish Premiership table and now sit in eighth.

Milligan believes it will take "big men" to get out of their form slump.

"We are all good footballers, so we know from that side of things we can turn it around, but I guess you find out the boys from the men at a time like this," he told Edinburgh Live.

"Everyone really needs to stand up and be counted throughout the squad. That starts with us, the older players. Formations and stuff like that are irrelevant if we’re not standing up to be counted and if we’re not doing the right things.

“As hard it is, we need to focus on the positives. We know where we went wrong at Kilmarnock and it will be addressed.

"We need to move forward and it needs to be done quickly because we’ve got a game on Wednesday. I think a win would flick a switch and turn things round.

"I’ve been in this situation previously and even if you have to grind out a result, it does something within the squad and it gives you belief again. 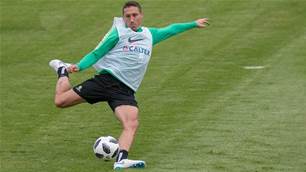