Andrew Nabbout's Urawa Red Diamonds have qualified for the quarter-finals of the Asian Champions League, while Bernie Ibini's Jeonbuk were knocked out on penalties.

Urawa overturned the deficit after losing 2-1 at home to Ulsan. The return fixture in Korea saw the Japanese side storm home to a 3-0 victory and a quarter-final berth beckons.

Urawa are out to reclaim their crown having won the tournament in 2017 but failing to qualify for last year's tournament after finishing seventh in the J-League.

Andrew Nabbout was an unused sub in both legs of the match but featured in four group matches.

Bernie Ibini's Jeonbuk Hyundai were knocked out by the might of Shanghai SIPG as it went down to penalties.

Ibini played a full match in the first leg of the tie drawing 1-1 at home.

Ibini was an unused sub as Jeonbuk took the lead in the second leg but were pegged back by Hulk. After a sending off for Jeonbuk, only penalties could decide the winner. 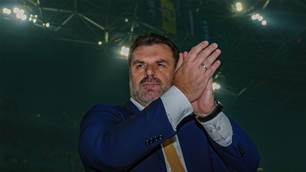 Ange: I want to win everything I'm in