Sydney FC were left to rue some costly misses and a goalkeeper brain fade as an Aaron Mooy-inspired Shanghai SIPG secured a 2-1 win in Wednesday's Asian Champions League clash in Qatar.

But two fluffed chances from Kosta Barbarouses, in the fifth and 55th minutes, kept SIPG in the match.

Scores were level when Mooy's perfectly-weighted cross was headed home by Li Shenglong in the 63rd minute.

And when Shenglong struck again with a diving header in the 79th minute, the Sky Blues trailed 2-1 despite having the better chances in the match.

Sydney's plight was summed up by a brain implosion from goalkeeper Thomas Heward-Belle, who was shown a red card in the 91st minute when he handled the ball while more than five metres outside the box.

Heward-Belle made the split-second decision after rushing out of his box to stop a long ball - only to realise it was going to bounce over his head.

His departure meant defender Rhyan Grant had to step in as goalkeeper for the final few minutes with Sydney having already made their five substitutions.

Mooy was a pivotal figure throughout the match for SIPG, with the Socceroo involved in most of his team's attacks.

The result left Sydney with just one point from three games, leaving them with an uphill battle to make it out of the group stages.

Barbarouses was left looking for a hole to hide in when he completely fluffed his close-range early chance with only the goalkeeper in front of him.

But he made up for it three minutes later when he provided an assist for Buhagiar to score.

Buhagiar made sweet connection with the bouncing ball to send it into the top left-hand corner of the net.

The Sky Blues almost had a second goal in the 14th minute, but Ben Warland's header bounced off the upright and Paulo Retre fired the rebound wide.

Barbarouses missed another sitter in the 55th minute when his attempted header from point-blank range came off his shoulder instead.

At the other end, Mooy's pinpoint pass set up Shenglong for the equaliser.

And Shenglong produced an even better effort in the 79th minute when he headed home while diving under pressure. 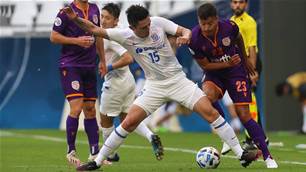 'Some feisty challenges' - Glory to learn from rough ACL tactics