Aaron Mooy says Brighton & Hove Albion can't get too down after their 2-0 loss to Chelsea.

Goals from Jorginho and Willian sealed the Blues' two-goal win.

Mooy and fellow Aussie Mat Ryan started for the Seagulls away from home.

The midfielder said Seagulls boss Graham Potter was staying positive after the defeat.

"He just said Chelsea were a good team and they deserved to win today but don’t get two down about it as they are a Champions League side," Mooy told The Brighton & Hove Independent.

"It’s football you can win, you can lose. It’s part of the job and you have just got to keep coming back by being strong mentally."

Mooy admitted it was always going to be tough going to Stamford Bridge.

"It’s against a big team away from home," he said.

"It’s always going to be difficult. We gave it everything but they deserved to win. Chelsea pressed really well and they rarely gave us time to settle and have the ball to allow us to play our style of play.

“They pressure you all the time. You don’t get time to settle on the ball to knock it around a bit but they don’t give you long. They are the good team they ask you questions.

"If it is not working for them, they do something different." 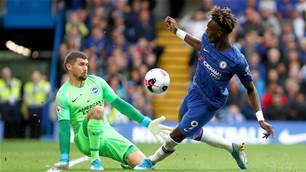 Ryan: We're getting there