Melbourne Victory coach Kevin Muscat has apologised for his side's display in the 6-1 loss to Sydney FC in the A-League semi-final.

Melbourne Victory's reputation as a team for the big occasions is in tatters after Sunday's 6-1 capitulation to Sydney FC in the A-League semi-final at Kogarah's Jubilee Oval.

And for the moment at least, their leaders aren't sure how to deal with the foreign feeling.

Perhaps that's because coach Kevin Muscat and retiring skipper Carl Valeri were as surprised by the showing as everyone else.

Victory were supposed to be feared, particularly after monstering through the finals series - and Sydney FC - to win the title from fourth place last year.

"We had a very off night," Muscat said.

"Unfortunately for us, in sport you have your highs and today was certainly a low.

"I apologise to our members and fans personally.

"Tonight, whichever way you want to look at it, we didn't perform. That's my responsibility.

"Everything will be dissected now. I haven't got a problem with that. And I'll take responsibility."

Muscat's acceptance of responsibility is an oft-employed tactic by the long-term Victory man designed to deflect heat from players.

Just how many will be around to atone next season is anyone's guess.

Big-money marquee Keisuke Honda has given his intention to leave.

Top scorer Kosta Barbarouses and marquee James Troisi, injured and unavailable for Sunday's loss, are out of contract.

James Donachie and Raul Baena have reached the end of their loans, Georg Niedermeier is at the end of his deal, and offers should come for Lawrence Thomas after a fine season.

Valeri, who was effectively retired by the result, was gobsmacked by the loss.

"When you cop, six, almost seven, it could have been more ... there's lot of areas you can improve

"There's no nice way to put it and it kills me to say it.

"What I am going to do is take a lot of lessons and hopefully pass them on to future generations."

It was Victory's record loss and the second biggest defeat in A-League finals history, behind only Victory's 6-0 win over Adelaide United in the 2007 grand final.

Muscat said he would rebuild.

"We didn't perform anywhere near our capabilities," he said.

"We're proud football club. We will pick ourselves up and explore areas because we need to get better." 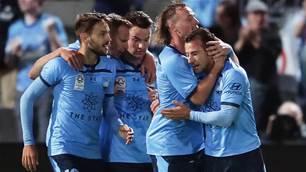