Kevin Muscat finished up as Melbourne Victory coach on Wednesday night with a limp 3-1 loss to Sanfrecce Hiroshima.

Kevin Muscat's coaching days at Melbourne Victory have come to an end but the club great says he'll fulfil his obligations before finally leaving next week.

That includes player exit interviews, a review of the club's season and Saturday night's Victory Medal.

And while Muscat says he'll be just a phone call away to the club's off-field leaders, he won't be involved in picking his successor.

Victory are on the lookout for just the club's sixth coach in their history after Muscat's decision to walk away from the job.

And just like his playing career, Muscat's stint on the Victory bench ended inauspiciously.

Eight years and 11 days ago, Muscat played the last match of his 20-year career on the South Korean island of Jeju, in front of just 1500 people, as part of another vain effort to qualify out of the Asian Champions League group stages.

On Wednesday night, Muscat was celebrated - along with retiring skipper Carl Valeri - as his team limped to a 3-1 loss to Sanfrecce Hiroshima.

Much of the 6,053-strong crowd stuck around to hear Muscat's departing words of thanks.

"That's not really for me ... I'll always be a friend, a fan and a supporter of the football club," he said.

Muscat, who was an assistant coach to Ange Postecoglou at Victory before his predecessor took the Socceroos job, said he had faith in the backroom team to choose the right person for the club - even if it meant straying from the club's attacking style.

"If you're looking in at the football club and its a prospective job for you, you'll do your research and you'll watch enough games to see what the fans enjoy.

"But I've learned one thing, everybody likes winning. You can do it in different ways though."

Muscat referred questions on his legacy at the club to his side's football style and the club's trophy cabinet.

"I've been here 14 years and six as a manager," he said. "We sit here today with the highest number of goals scored over that period, 600-odd goals.

"300 of them in the last six years. The Championships we've won. The record number of trophies.

"(My legacy) is for everybody else to decide (and) you can see for yourself because it should be visual." 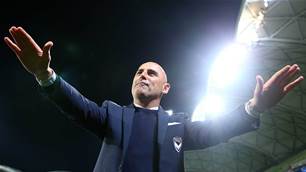 Muscat: It's not easy to say goodbye