Kevin Muscat’s faith in a journeyman forward was rewarded on Monday with two brilliant goals that rescued a point for Sint-Truiden in the Belgian Pro League.

Haitian striker Duckens Nazon, who has played for nine clubs in seven years, has become a regular name on Muscat’s team sheets having played a bit-part role under previous managers.

And on Monday the marksmen, making his seventh appearance of the campaign, went on to notch his third and fourth goals of the current season to earn Sint-Truiden a 2-2 draw at mid-table OH Leuven.

Nazon had given his side a first-half lead after following up a clever turn with a blistering drive from 20 yards into the bottom left corner.

OH Leuven would then score twice to turn the game on its head, but it was the Haitian forward who again popped up, this time on 84 minutes, to lash home an equaliser and earn a point for his teammates and his Australian boss.

Although Muscat’s debut season is turning into a dogfight – his side currently sits third from bottom with ten points from 12 games – the rise of Nazon is something of a success story for the struggling Belgians.

So far this year he is his side’s joint-top scorer and has donned a Sint-Truiden shirt more times in the last three-and-a-half months than the previous two years combined.

Last term he played just one league game, and the year before that he managed five before being loaned out to Scottish side St Mirren.

Incidentally, Marc Brys was the man in charge of Sint-Truiden at that time, the same man who now sits in the dugout for OH Leuven and was watching on as Nazon taunted him with his two-goal showing on Monday evening.

Under Muscat’s leadership, Nazon has now started three league games – bagging as many goals along the way – and made four appearances plus another goal off the bench to take his tally to four in seven for the season so far.

The 26-year-old powerhouse will likely be key to his Australian manager’s hopes of keeping Sint-Truiden in the Belgian top-flight in what is his first foray into European management. 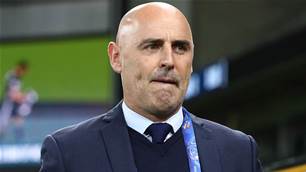 'He's a good coach. Everyone knows that...' - Muscat had no luck in Belgium: Sainsbury 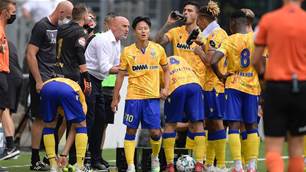 Kevin Muscat off to a winning start in Belgium