The notion that Socceroos gaffer Graham Arnold is a risk-averse coach cocooned in a cage of caution has exploded into a thousand pieces.

When it was least expected, Arnold sprung the most audacious call of his career to curate the masterstroke which on Tuesday morning ushered the Socceroos into their fifth successive World Cup.

By unleashing unsung Andrew Redmayne for the World Cup qualification penalty shootout against Peru in place of skipper Mat Ryan at the Ahmad bin Ali Stadium, Arnold torpedoed a litany of myths.

The bearded keeper’s instantly iconic save to clinch a spot at November-December's Big Show in Qatar - and the manic, bug-eyed, mouth-agape celebration that followed - will be seen time and again in the coming months.

What was Arnold thinking throwing in the Sydney FC keeper ahead of Ryan, who’d kept Peru goalless in the preceding 120 minutes? Had his mind melted amid a cacophony of nerve-shredding pressure.

To some, Redmayne was fortunate to even be in the squad after an indifferent season for the misfiring Sky Blues.

Yet Arnold, perhaps guided by an epiphany, not only brought him into the fold for the sudden death duels against UAE and then Peru, but unchained him for the cameo performance of his career - Redmayne's sharp stop from Alex Valera’s spot-kick sparking scenes of delirium.

“To try and get into the mental aspect of Peru while we were making that change, a bit of uncertainty in their brains. that’s the reason why.”

And, hey presto! Australia duplicated the deeds of 2005 when they defeated another Latin American foe, Uruguay, also on penalties to seal qualification.

There were those who questioned whether Arnold should have made it this far after a campaign which looked to have flamed out after a bright start.

But, despite the travails of having to distil every every last millilitre of talent from a workmanlike squad, Arnold’s methods have been vindicated and he now gets to pit his wits against France, Denmark and Tunisia at the group stage in Qatar.

Arnold dubbed the feat “one of the greatest achievements ever”.

And when you consider the tribulations he faced through Covid, some crushing criticism along the way whilst working with a group of players mainly plying their trades in world football’s less glamorous leagues those sentiments ring all too true. 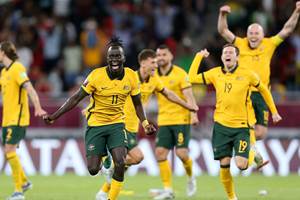 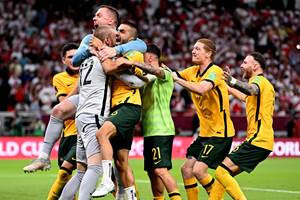