New Socceroo call-up Andrew Nabbout hopes he and Dimitri Petratos can bring their dynamic attacking combination from Newcastle into the national team for the Socceroos.

Nabbout and Petratos, former Jets teammates, have both received their first international call-ups for Australia’s friendlies against Norway and Columbia.

This season the pair have teamed up in a devastating partnership in the A-League, combining for 19 goals and 16 assists to help Newcastle reach second on the table.

With Nabbout joining Urawa Red Diamonds in Japan earlier this month, he and Petratos are no longer club teammates. But now reunited with the green gold, the 25-year-old is hoping the duo can make an impact together at international level.

“It’s always good to have someone familiar there,” Nabbout said.

“Me and Dimi have obviously done well this season, we’ve combined well together. He’s just easy to play with, similar to Aaron Mooy, he kind of knows where you are regardless of whether he’s looking at you or not.

“I looked him yesterday at training and I just said 'business as usual' and he said 'yes, wherever you make that run I’m going to play the ball'. It’s good to have him there.

“He’s a very good player and as you’ve seen in the A-League, along with the other boys here, he’s definitely deserving of a spot here. His form showed that and hopefully we can both bring it into this camp and into these two games.”

Nabbout said he has been welcomed into Socceroo camp with open arms and is trying to learn all he can in his first taste of international football.

“All the players have been unbelievable,” he said.

“Mile, Millsy, I played a little bit with him at Melbourne Victory and he’s very good professional as well. All the boys, especially those in the front third – Leckie, Kruse – all of them are people that you look are up to and are people you can pick their brains.

“Even though all of us have different playing styles, you can always take little bits off everyone and try and add that to your game. I wouldn’t call it leaning, I’m just trying to absorb it all.

“I’m just trying to be a sponge at the moment and try and get everyone’s advice because hopefully I get to pull on that jersey at the World Cup, but there are a lot of boys that have played here for the last couple of years together and this is my first camp.

“I’ve got to get used to the team very quickly and I’ve got to get them used to me as well. We’ve not got much time, but it’s exciting and I can’t wait.” 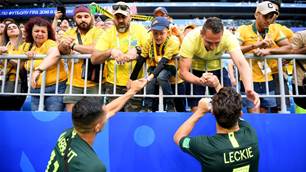