Robinson watched from the stands at McDonald Jones Stadium on Sunday as Petratos scored twice in a 4-3 A-League win over local rivals Central Coast Mariners.

The victory was the Jets' first since November as they attempt to haul themselves off the bottom of the competition ladder.

Robinson led his first training session with the Jets on Tuesday and made it clear he believes 27-year-old Petratos can become a star under his guidance.

"I think I can get Dimi to another level," the former Welsh international said.

"He needs to believe in himself, because he's certainly got a coach that believes in him and wants to push him."

Capped three times by the Socceroos, Petratos was a member of Australia's 2018 World Cup squad and is a key man in the Jets' line-up.

Petratos has now scored five goals and set up another five this season but Robinson said before the Mariners game he had encouraged the playmaker to back himself more in front of goal.

"I said he was working hard, he was being a good team player but he wasn't scoring and he wasn't creating goals," Robinson said.

"I said to him that's what you're in the team to do. If I'm going to play this way and you're a number 10 or a second forward behind a number nine, then I need you to be proactive rather than safe.

"To be fair he took it on board.

"My job is to get the best out of Dimi Petratos as well as all the other players, but he needs to believe in himself. He needs to get back to where he was but it'll take hard work."

The Jets suffered a setback on Tuesday with confirmation midfielder Ben Kantarovski will miss at least four weeks due to injury.

The 28-year-old limped off early in the win over the Mariners and scans have revealed a grade two tear in his quadriceps muscle. 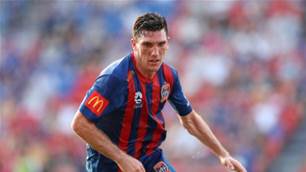