Newcastle is the grip of Grand Final fever as the Jets go for glory for the first time in 10 years.

The A-League decider sparked a run on Jets merchandise with fans preparing for the sold-out clash at McDonald Jones Stadium tonight.

About 5,000 tickets to the match have gone to interstate visitors - the coal town expecting to reap almost $2million from the influx. Accommodation is booked out and extra flights had to be scheduled from Melbourne.

Fans who missed out on tickets to the match will be able to catch the action at a  live site in King Edward Park. The game will be broadcast live from 7.50pm and there will be food stalls on site.

Playing shirts go by the thousands as fans rush to get Jets gear https://t.co/6Jree60Fc9

The Newcastle Herald ran a 30-page feature on the do or die clash with Melbourne Victory as the rhetoric ramps up before kick-off.

Absolutely outstanding read today @newcastleherald! Brilliant. Huge well done to everyone involved. I am all kinds of fired up for this #ALeagueGF! pic.twitter.com/wVujy4U9D1

Shop owner for official Jets merchandise, Belinda Hedley, told the Newcastle Herald she had sold about 2500 jerseys, 700 scarves and 500 flags since last weekend. Five hundred gold shirts that arrived on Wednesday were snapped up within hours. Meanwhile bars made a late bid to extend trading hours to make the most of the football crowds.

From Nabiac to Parliament House, everyone is getting into the Grand Final spirit! 🔴🔵 pic.twitter.com/5wThClRFFI

Newcastle Lord Mayor Nuatali Nelmes was keen for the city to capitalise on the opportunity presented by the game: "We know that a major event of this level brings a strong positive economic impact to the host city.

"It's yet another chance for Novocastrians to showcase Newcastle as a major events city and to demonstrate just how much fun is to be had, whether it be at the football or dining in the CBD or taking in the stunning coastal views of the Bathers Way walk.”

The Grand Final has surpassed occupancy rates recorded when Newcastle hosted the World Grand Hockey Masters on this same weekend in 2016.

"Extra flights into Newcastle Airport have been scheduled with an additional 1,000 passengers travelling in on flights from Melbourne alone," the Lord Mayor added.

Some of the staff at our Callaghan campus showing their support for the @NewcastleJetsFC ahead of the #ALeagueGF! ✈️ 🔴🔵 pic.twitter.com/ERViLtlzwQ 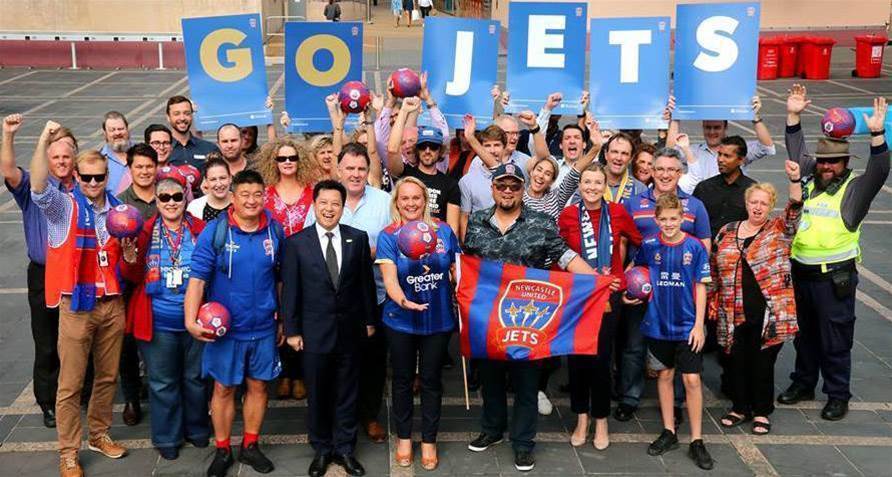