Western Sydney Wanderers came out on top of the grudge match with Newcastle Jets. A Tate Russell belter sealed a 2-1 win in an exciting game of football. Ziggy Gordon opened the scoring for the Wanderers while Nigel Boogaard pulled a goal back for the Jets in an entertaining night in Newcastle.

1. Wanderers have the spirit

When the Jets came hard to try and get a late equaliser, the Wanderers rolled up their sleeves and got down to some good old fashioned grit and determination.

They chased hard, threw their body in between the ball and their opponent, put their heads where angels fear to tread.

2. Thomas Aquilina is going to be a star

The Wanderers should be proud to see so many youth products in their team who are showing they belong at the A-League level. Tate Russell, Keanu Baccus and Tass Mourdoukoutas were strong tonight but 19-year-old Thomas Aquilina was excellent on his starting debut.

He was busy all night with 69 touches in attack and was involved in 11 duels. Aquilina kept the Newcastle defenders honest all night drawing fouls as they tried to keep him at bay.

No group of players have had more sleepless nights than the Jets players. Despite all they have gone through with the club's uncertainty, the 15 that took the field tonight were exceptional.

Ramy Najjarine was exceptional late on with his skill and guile keeping the Wanderers guessing all night. Nigel Boogaard was inspirational, the skipper heading his team back into the game with a deft header from a Najjarine free kick.

Steven Ugarkovic was immense with 98 touches and 80% accuracy from 70 passes.

Jets fans should be proud of their team as they embark on their latest reincarnation. 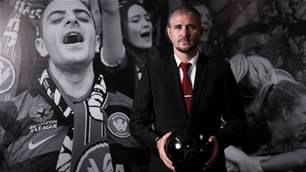