Sydney FC playmaker Milos Ninkovic has capped off a stellar A-League season with a clean sweep of the major awards at the Sky Blues night of nights.

During a glittering night at the SCG, the club celebrated their standout performers including those that helped the harbour-siders to record-smashing A-League Premiership and Championship double. The Serbian midfielder, and newly signed marquee, claimed the top award the Hyundai A-League Player of the Year, ahead of Danny Vukovic, Bobô and captain Alex Brosque, as voted for by a select panel of coaching staff after each match in the 2016/17 season.

The midfield maestro played 28 of the Sky Blues 29 games this season, assisting 11 goals while also creating 47 chances for his team mates. The number 10 scored nine goals himself and converted the winning penalty in the  A-League 2017 Grand Final to ensure his name is recorded in the annals of the Sky Blues as one the club’s most influential and successful players.

Ninkovic said he was delighted with the awards and paid testament to his team mates for the achievements.

“I am very happy to have received these awards,” he said.

“These awards are not only for me they are for the team, we won together and as a family everybody played their part.

“I would also like to thank the Sydney FC Members and fans for their kind words and support. It is a pleasure to play in front of you all each week and I can’t wait for the new season.

“I am focused now on defending our titles and I can’t wait to also play in the AFC Champions League again and win that for our club.”

Capping a remarkable debut season in the Westfield W-League, young striker Remy Siemsen earned the Sydney FC W-League Players' Player of the Year award following her impressive displays of skill and poise in the Sky Blues front line, displaying maturity beyond her 17 years.

Siemsen featured in 12 of the Sky Blues 13 games in the 2016/17 season and found the back of the net six times in an impressive first season with Sydney FC, earning the November nomination for NAB Young Footballer of the Year along the way.

Currently completing her HSC year at school, Siemsen said she was honoured to have taken out the top award for the Westfield W-League season.

“I’m really shocked to have won this award,” she said.

“To be a part of a team with Matildas such as Caitlin Foord, who I look up to, and Kyah Simon and win Player of the Year is really exciting and something I’ll always cherish.

“I was really excited to play my first season in the W-League this year and never in a million years thought I’d win this award. I’m hoping to just build on this success now and one day make my debut for the Westfield Matildas.”

National Youth League midfielder Andrea Agamemnonos was voted the Sydney FC Youth League Players' Player of the Year following his impressive showings in the heart of the Young Sky Blues midfield on the road to a Grand Final appearance.

International marquee Bobô picked up the Sydney FC Golden Boot with an impressive 15 goal haul on the way to a Premiership and Championship double, and youngster  Siemsen also claimed the Westfield W-League Golden Boot for her six goals in 12 appearances.

The Sky Blues’ Head of Strength and Conditioning Andrew Clark was presented with the Chairman’s Award for his success in producing the fittest Premiership and Championship winning team in the A-League.

Held at the historic Sydney Cricket Ground, guests and VIPs were treated to pre-match drinks on the Sky Blue Carpet on the iconic SCG pitch, before moving inside for formalities, with entertainment provided by comedian Vince Sorrenti.

Your @ALeague Premiers and Champions presented on stage to round out a fantastic night! #SydneyIsSkyBlue pic.twitter.com/vYgrF6rB69 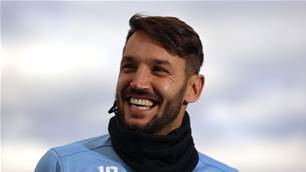