Teenagers Oskar van Hattum and Finn Surman have become the latest New Zealand talent to graduate to the professional ranks at A-League Men side Wellington.

The pair, who originally missed out on contracts for the 2021-22 season, have signed long-term deals with the Phoenix as they aim to follow in the footsteps of New Zealand internationals Liberato Cacace and Sarpreet Singh.

Cacace recently became the first Kiwi to appear in Italy's Serie A, after making a loan move to Empoli, while Singh is on loan at German second division club Regensburg from parent club Bayern Munich.

For Surman, who made his Phoenix debut in the FFA Cup in December and has made two league appearances, the club's track record in developing young talent has him excited about his prospects.

"It definitely encourages you," the 18-year-old defender said.

"You see all these players stepping up.

"It started out with Libby and Sarpreet and all those guys, I wasn't that close to them, but then you see people like Sutts (Sam Sutton), Waineo (Ben Waine), Oldie (Ben Old) and AP (Alex Paulsen), George (Ott) and Moggy (Kurtis Mogg) -- who you've played with and that kind of encourages you a lot to keep pushing and try and make the step yourself." Van Hattum, the nephew of former All Whites goalkeeper Frank van Hattum, is a boyhood Phoenix fan who dreamt of playing for the club when he was in primary school alongside Phoenix A-League Women's player Mackenzie Barry.

After missing out on Ufuk Talay's initial squad to travel to Australia where the Phoenix have been based all season, van Hattum realised his goal of becoming a professional footballer hung in the balance.

"It was really disappointing actually finding out the team would be leaving without me," van Hattum said.

"It kind of just fuelled the fire a little bit."

Debuting in the FFA Cup win over Western United, the 19-year-old striker has gone on to make five appearances off the bench in the A-League Men this season.

"Seven-year-old me would be really proud of that," van Hattum said.

"When they came with the offer it was really a no-brainer... hopefully it's just the beginning." 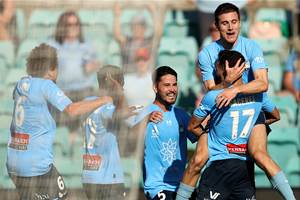