Erick Mombaerts isn't allowing himself to get caught up in the festive spirit ahead of this Saturday's Christmas Derby, instead focusing on a Victory side that gaffer Marco Kurz has revealed will feature a returning Tim Hoogland.

Following on from a season in which a dreary on-field product combined with rancour off it to alienate a significant portion of fans, there was a real possibility that a failure by Mombaerts in his first year in charge in Bundoora - especially after he quickly nailed his colours to the City Football Group mast - could do irreparable harm to the bond between the club and its remaining fans.

But second on the table heading into the derby, such apprehensions appear, for now, to be misplaced: Mombaerts’ side able to go 13 points clear of their cross-town rivals Victory with a game in hand should they triumph this Saturday.

And despite the constant refrain from the City camp throughout the week revolving around discounting the form guide when it comes to a derby, the side in City Blue are heavy favourites to do so.

For so long consigned to the shadow of their navy blue foes, such an early-season margin - combined with the second-place on the table that would accompany it - would constitute a very merry early Christmas present for the City faithful.

Personally, though? Mombaerts has a slightly more humbugish demeanour.

“I’m not… I’m totally emotionally controlled,” he said on Friday. “I don’t care about this.

“For me, it’s just a game, three points.

“The first [derby] I was disappointed a lot because we couldn’t play with our best players and now it’s not the same case.

“We’ll play, I hope, with our best starting XI, so we’ll see. But I was disappointed with our first game.

“If we can [win] this we’ll be happy for the fans. Yes, because for our fans it’s a bit different because it’s a derby.

“But, in a championship, the most important thing is to be consistent and constant also. If you win one derby and lose three or four games after it’s not good.

“So, we have to prepare well, winning our previous game it was the best thing to do.

“We need to be consistent in our play. That’s the most important thing.”

While tidings aren’t all that joyful for Victory gaffer Kurz heading into this weekend, he has been some the recipient of some cheery news.

Fortunate to escape with a point after being outplayed by Wellington Phoenix last week, his side enters the round in the eighth position on the table but will are set to welcome back defender Tim Hoogland to their squad for this week.

The German is also expected to start.

“He’s available. Not Thomas Deng, but the rest of the squad is available.

“We signed [Hoogland] to play, so he will start.

“We signed him as a leader at the back and that’s what he can do. He can organise, he is for sure not fully fit as when a played a couple of games in a row but he will stabilise our defence and it’s good for our game.

“One of his strengths is his organisation, he’s very good at organising the team from the back position, that’s really good.

“He agile, he’s fast, he’s a good header… yeah, he’s a very complete player and we’re happy he is back. But it’s after injury, which means tomorrow we need good teamwork that we will have success with.

“He trained with the team, for now, I think two weeks. That means he’s ready. He’s not as ready as when he played friendly games at the start of the season but he’s ready to start.”

Anthony Lesiotis, who has impressed enough in his few appearances at right back to come into Olyroos contention, will retain his place in the starting XI despite the reshuffling to accommodate Hoogland.

“I think he did a good job,” Kurz said. “He’s a young player. He came in for two games and he did it well. For me, there’s no reason to change.” 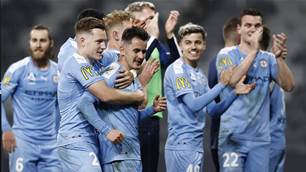