Melbourne City midfielder Kearyn Baccus says he's keen to put his past at Western Sydney Wanderers behind him.

Baccus's last game for the Wanderers was against his current club in the FFA Cup quarter-final where he reacted angrily about being substituted in City's 2-1 loss.

The 27-year-old ran straight to the tunnel, throwing his shirt away in frustration.

Wanderers coach Markus Babbell seemed unconcerned at the time, but Baccus left soon after and today said he was happy to be with his new club.

Baccus managed 90 minutes in City's first two games of the season and has been a key in the middle of the park.

"A lot of stuff happened in the past, now it's a fresh start and I'm happy Warren Joyce gave me that," Baccus said.

"From day one, I've felt comfortable with the boys and I'm grateful for being here. Hopefully we can win something this year.

"Warren's a great coach and he's been unbelievable so far and the boys have been good. With the team we have, we can go far this year.

"He definitely talks to his players a lot more than (former Wanderers coach Tony Popovic) does. Australian players need guidance which is good.

"I'm 27, so I've been in and out my whole life. The transition doesn't really faze me to be honest, I just want to come, work hard and hopefully I win something."

City have four points so far after a 2-1 opening round derby win and a 1-1 draw with Central Coast Mariners last week.

Baccus's side meet Sydney FC at home on Friday night and he hopes the Sky Blues will come back tired after tonight's cup final.

"Sydney are a good team every year, but they look a bit different under Steve Corica compared to Graham Arnold," he said.

"Now with the FFA Cup, I think it'll be good to do something while they're tired or fatigued. I reckon we could get a result."

Baccus added he was proud of his younger brother Keanu, who is still at Western Sydney and has played two full games so far.

"Keanu is a little bit disappointed that I left, but he's got to stand on his own two feet and be his own man," he said.

"It's good for him as a young player starting every week. It's up to him what he does with his career and hopefully he keeps going." 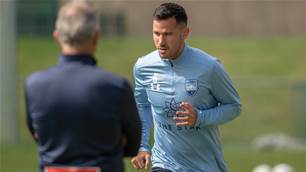