Wellington Phoenix veteran skipper Andrew Durante is the latest to confirm he won't be back in yellow and black next season.

Sydney-born Durante joined Phoenix 11 years ago from Newcastle Jets and even took out New Zealand citizenship, ultimately playing for the All Whites, as he embraced his new Kiwi life.

But after more than 270 games for the Wellington side, the 37 year old today confirmed it was all over for him at the club.

"It's with a heavy heart that I announce I will be leaving the Wellington Phoenix after 11 years service," he revealed on Instagram today.

"Arriving in Wellington in 2008, it was well-publicised that my initial intentions were to serve my two years contract then head back to Australia.

"I never thought that 11 years on I would still be captaining the team.

"On top of that, never in a million years would I have thought that I would also go on to represent the NZ national team on 24 occasions, even captaining NZ on two occasions, an honour I'm extremely privileged to have experienced."

He added: "I feel my contribution to the club has been a significant one and it is one that I am really proud of."

The club currently only has one year left on its A-League licence and with doubts hanging over the club's future, the player roster is currently looking spartan.

Four of the five visa spots are now available and chief goalscorers Roy Krishna and David Williams have also both quit the club.

The club later confirmed Dirante's exit and Phoenix chairman Rob Morrison thanked the long-serving captain on his legacy and service to the club.

“It goes without saying that Andrew will be missed," said Morrison.

“His leadership, determination, and fight for the club shirt has been unrivalled and he has been a huge contributing factor to the success the club has seen over the years.
“He leaves a legacy, one that will stay with the club and the fans of the club for years to come.
“While we discussed both playing and management options for Andrew this year and beyond, we understand his reasons for calling time here at the Wellington Phoenix.
"As we say goodbye to Andrew, we must also say thank you to Sarah Durante for her support and friendship with everyone at the club, including past and present families who made the move to Wellington.’’
Durante added that the decision to leave Wellington was the hardest of his career.

"Obviously this decision was an extremely hard one, one that I wrestled with for many nights but I felt the time is right for me and my family to move on and experience something new, and face new challenges together," he said.

‘‘I have given everything I could possibly have given to the football club both on and off the pitch and I feel now it's time for someone else to help guide this club forward.

‘‘I've had some of the best moments of my life whilst playing for this club and I wish it all the success in the future.

‘‘There are so many people to thank during my time at the club for the past 11 years.

‘‘Rob Morrison and the Welnix ownership, thank you for your support and efforts both towards me personally and this club.

‘‘All the staff and players that have come and gone, thank you for your friendship and for making my time at the football club so enjoyable.

‘‘Last but not least, the fans and people of this city, thank you for accepting me as one of your own.

‘‘We have ridden many highs and lows together but your support throughout for myself and my family has been nothing short of incredible. Thank you." 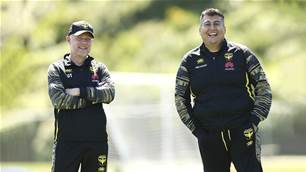