Round 19 of the 2018 National Premier Leagues NSW is in the bag and the finish line is in sight for the competition’s 12 teams.

APIA Leichhardt Tigers are clinging on to pole position in the race for the Premiership by only goal difference after being held to a draw by Wollongong Wolves.

Sydney Olympic saw their opportunity and with a win against Sydney FC collected all three points and moved into touching distance of top spot.

Manly United staged a late escape to snatch victory against Sutherland Sharks in their clash at Seymour Shaw.

Rockdale City Suns closed out the round with a 2-1 win against Marconi Stallions at ilinden Sports Centre on Sunday.

An early goal to Adrian Vlastelica had the home side in front inside the first 10 minutes.

Bonnyrigg found a way back into the match through their captain Ray Miller before substitute Patrick Antelmi found the winner in the dying stages of the game.

Super sub Sam Wilson was the hero firing home the winner for Manly United in a tense 1-0 victory against Sutherland Sharks at Seymour Shaw on Saturday night.

United scooped all three points after Wilson’s incredible 89th minute winner which broke the hearts of Sutherland fans as the game looked destined for a draw.

The result has kept Manly’s finals hopes alive with three rounds to go while Sutherland’s chances, although still mathematically possible, are all but over.

Blacktown City came from behind to earn a hard fought three points against Hakoah Sydney City  with a 2-1 at Hensley Athletic Field on Saturday.

A Joey Gibbs double in as many minutes was the difference for the visitors as Hakoah once again tasted defeat after leading.

Amaury Gauthier opened the scoring for Hakoah on the cusp of halftime to give the home side a 1-0 advantage going into the interval.

However, the home side couldn’t contain a relentless Blacktown attack and Gibbs netted twice in two minutes.

Hakoah tried to fight back but it was too little too late as Blacktown scooped the three competition points.

APIA Leichhardt Tigers have extended their unbeaten streak to five matches after scoring late in stoppage timeto secure a point in a 1-1 draw against Wollongong Wolves at Win Stadium on Saturday night.

The visitors went a goal down after just two minutes when Wolves striker Peter Simonoski headed home to give Wollongong an early lead.

But a 93rd minute equalizer from the head of Tigers player Sean Symons rescued a point for the visitors, extending their stay at the top of the NPL NSW ladder for at least another round.

A second half resurgence was enough for Sydney Olympic to claim a 3-2 victory over Sydney FC at Lambert Park on Saturday night.

After a slow first half, the visitors picked up the pace in the second stanza to secure an important three points that put them back in contention for the NSW National Premier Leagues Premiership, despite a last-minute penalty to Sydney FC.

Olympic are now level on points with top side APIA Leichhardt Tigers but remain in second spot because of an inferior goal difference.

Goals to Bai Antoniou and Aleks Canak mid-way through the second stanza gave the Suns the upper hand.

Sean Rooney struck with a curling free-kick in the final ten minutes to halve the deficit but it proved to be nothing more than a consolation goal for the visitors.

Rockdale now have a firm grip on fifth spot with 29 points, five ahead of sixth placed Manly United. 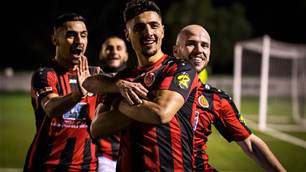