Central Coast Mariners star signing Tommy Oar has been ruled out for the rest of the season after picking up a crippling knee injury on Sunday against Sydney FC.

Oar subsequently landed awkwardly on his left foot during an aerial challenge early in the first half which caused a hyper extension of his knee and spraining his posterior capsule ligament sprain.

Although unlikely to need surgery, Oar's estimated recovery time is 10-12 weeks, effectively ruling him out for the remainder of the Mariners’ current Hyundai A-League campaign.

“I am really disappointed to not be able to play again this season,” Oar said today.

“I know I’m in great hands with Dave McGinness and the medical team at the Mariners, so I am putting my full focus into getting myself healthy and fully fit for next season.

“Obviously I will be trying to support the boys for the remainder of this season and helping in any way I can around the club.

"I would also like to thank the fans for how patient they’ve been with me, I really appreciate it and look forward to repaying them next season helping drive the club to success.” 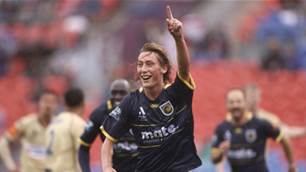