Victory swooped this week to sign the 32 year old Swede on a permanent deal, snatching him from under the nose of Championship side Swansea who were hoping to get him on loan from Toulouse.

But instead Toivonen - who scored against Germany at the World Cup just two months ago – has decided to make the trip Down Under.

And he's keen to put some silverware in the cabinet while he's here.

“If you go on an adventure, you want the possibility of winning, you want to win something," he said today.

“I know Melbourne Victory is a big club in Australia, they won the Championship last year and they’re playing in the Champions League.

“With the squad that has been assembled, including Keisuke, Georg and myself, I think we can do some good things this year.”

Toivonen, who has also had spells with Malmo, Rennes, and PSV Eindhoven, comes in to replace Besart Berisha who left the club for Japan earlier this year and has big boots to fill for Victory's attack.

But coach Kevin Muscat is convinced he is the right man for the job.

“Ola brings proven quality to our attack and he will play a big role in leading our forward line this season," Muscat said.

“He is exactly the kind of player we wanted to recruit, he is an accomplished striker so I’m delighted he’s decided to come to Melbourne.

“We still have one visa spot available and we’re working hard to add even more quality to our ranks.” 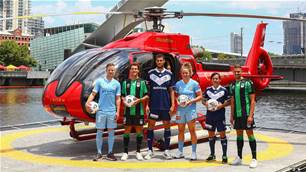