A sublime header from Ola Toivonen secured Melbourne Victory a 1-0 win over Western Sydney Wanderers tonight, but the Swede can't quite wrap his mind around what comes next.

The 32-year-old condemned Wanderers to their 15th defeat of the season in the 22nd minute and ensured third placed Victory head into the finals with some momentum.

“It was a nice goal, good cross from Tommy (Deng) and we fly home with the three points,” Toivonen told Fox Sports post-match from ANZ Stadium.

“I think the whole season has been a little bit up and down, a lot of injuries going through the squad but yeah now the fun part starts, so we look forward to it.”

Ola Toivonen with an absolutely THUMPING header to put @gomvfc in front!

After spending most of his playing career in Europe, Toivonen admitted finals football was a strange concept.

“It’s weird. It’s weird. You’re playing a lot of games throughout the season and to be honest they don’t really mean a lot," he said.

“As long as you’re in the top six you’re good. So yeah, we finished off in the top three spots so we get the home advantage.”

Kevin Muscat’s men will have to wait until tomorrow night when Premiers Perth Glory host Wellington Phoenix to learn whether they will meet crosstown rivals City or the Nix in the elimination final.

Whichever, Victory will hope they can pull off a similar feat to last season when they came from fourth to lift the Championship trophy. 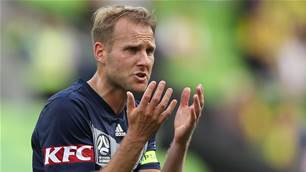