Some 1990s television classics and his passion for music are helping Socceroo Jackson Irvine to deal with life in coronavirus lockdown.

As Hull City's captain, he's already a 'Tiger King' but it's not Netflix's hit new series which has helped Socceroo Jackson Irvine to wile away the hours in coronavirus lockdown.

While large parts of the world have used the extra time at home to binge-watch the mini-series about American zookeeper Joe Exotic, there's a more retro feel to Irvine's viewing choices as the English Championship's suspension rolls into a second month.

"I've been rewatching some classics, some favourite old ones of mine," the Socceroos' midfielder told AAP.

"I've been having a real throwback kind of isolation in that sense."

Away from retro television, another facet of Irvine's life getting him through isolation is music.

Irvine's passion for music is well known and he concedes some of his newest records are quickly becoming vintage due to repeated plays.

"It's always something to do in terms of playing records, playing music," he said.

"I've been probably playing my guitar more in this little time than I had in a while before that.

"It's a great outlet to have ... to be creative whether it's music or artistic things. It's a chance to explore maybe those things that you haven't had a chance to go with for a while." 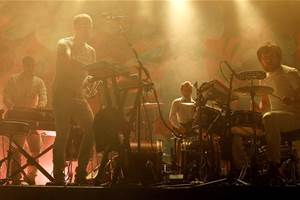 Socceroos' midfielder and music lover Jackson Irvine's top 10 tracks to get through the coronavirus lockdown.

A self-confessed "terrible" trainer in isolation, Irvine admits he has increasingly found himself missing the competitive nature of football the most during the COVID-19 pandemic.

While he's been keeping fit at home, the 27-year-old concedes it's a far cry from the life he's come to love over the past decade as a professional footballer in the United Kingdom.

"I miss the competitive edge of training, of playing small-sided games, doing possession drills," he said.

"I thrive on competition and just running against the clock for me is absolute torture. I've never been great at it and this has been a bit of a test for me in that way to make sure that I'm still finding ways to keep myself switched on in that way.

"I'm a professional and you do the work you have to do for sure but I'm very much missing the competitive edge to football and not even being able to watch live games ... you just feel there's a hole where football's kind of gone and it is really bizarre."