Prso joins Phoenix from Croatian first division side NK Osijek.  Wellington had to negotiate a release with the club to acquire Prso's services, the terms of which were not specified.

The 20-year-old had been in Europe for a number of years.  He originally moved abroad aged 14.  After a period of time with Bayern Munich and Southampton's academies, the Australian born player joined Croatian side Dinamo Zagreb in 2017 on a two-year scholarship contract.

He then moved over to Slovenian club Olimpija Ljubljana in 2019 before signing with Croatian first division side NK Osijek last year.

The midfielder has never played for the Croatian club's first team but has represented Osijek's second team. He had also went on loan last season with A-League opponents Newcastle Jets, featuring 17 times for the Australian side, finding the back of the net once.

Prso joins Phoenix with international experience.  According to The World Game he is eligible to represent Australia, Croatian and Serbia and has previously played for Serbia's U-15 side.   He has since made the change to the Green and Gold playing for Australia's U-23 side.

In fact, Prso is currently with the Olyroos in Doha, Qatar preparing for the upcoming series of U-23 AFC Asian Cup qualifiers.  The Australian U-23 men meet Tajkistan later this month.

“Fortunately for me this is the second time I’ve been involved with the Olyroos this year, so it’s been amazing – everything is there for us to perform and continue to improve, so it’s a great opportunity for myself and the team," said Prso upon his signing with the Phoenix.

He went on to address his excitement of his permanent return to the A-League after so many years abroad, specifically with Wellington Phoenix:

“I saw the Phoenix’s first game back at Sky Stadium last season and it was definitely a sight to see the stadium full and the atmosphere so electric; that went viral across Australia.

“So when I saw video of that I thought about how nice it’d be in play in front of a set of fans like that – I can’t wait.”

He also added: “Honestly, it’s a great feeling – I’ve been told a lot about the coach (Ufuk Talay) and the Club, and I’ve been following the A-League for the past 10 years or so and Wellington have always been a Club that plays good football and has amazing fans; so it’s a really proud moment for me to be joining Wellington.

“I saw last season the type of football the Phoenix were playing, and I thought they were a great squad with some talented players - like [fellow Olyroo] Piscopo – so I’m really looking forward to linking up with those boys.

“I’m looking to bring some energy and creativity to the midfield, my game is all about passing, creating chances, high energy and I’m going to try and get my name on the scoresheet as much as possible.”

“We’re excited to have Luka join the squad, he will be a solid addition to our midfield for next season,” says Talay.

“The experience that Luka already has at 20 years old – having played in Europe, internationally with the Australian team and last season in the A-League – shows the potential and ability that he has.”

Talay stated last Friday in an address to media that tentative plans are currently underway for the Phoenix's move to New South Wales at the end of the month.  Specifying the club is hoping to avoid quarantine with their move.

The Head Coach stated that Valentine's Sports Park in Glenwood, Sydney will most likely be their base for the beginning of the season.  With the current plans in place, Prso should join them there after his Olyroos duty. 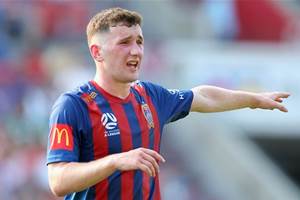 The schedule for the fist six rounds of the Wellington Phoenix's 2021-22 A-League season can be found using the following link.