The Olyroos have done it! Graham Arnold's team have broken a 12-year drought and qualified for The Olympic Games in Tokyo after Nick D'Agostino's dagger blow to the Uzbeks. Here are your player ratings for the tournament

He played every single minute of the AFC U23 Championships and kept his second clean sheet in the knockout phase. Glover came of age in this tournament between the sticks. 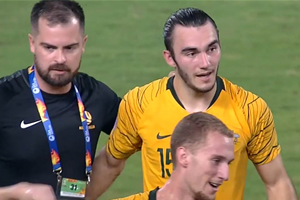 It's a long time between drinks. So before we all go clamouring to the bar for another round, what have we had time to ponder?

Some will still be wondering why Deng was favoured as a right full-back as opposed to his natural centre-back position but he does a commendable job in either station.

This tournament and once again against Uzbekistan shows the Wanderers defender has a lot to improve on individually. Sloppy passes and turnovers became a common theme in his play, but he showed signs of improvement as the tournament wore on.

One of the stars of the tournament. Dylan Ryan has been calm under pressure and astute defensively for Australia playing every single minute at centre-back on the Olyroos journey in Thailand.

The captain leads the way for Australia. He personally had a shaky tournament with plenty of fans getting frustrated with his lack of accuracy in crossing, but his defensive performance was something to behold against the Uzbeks.

Duncan had a shaky few matches leading into this game but he was a different beats against Uzbekistan. He was tenacious, winning the ball high up in the field and played a superb first time ball to release Nick D'Agostino for the winner. 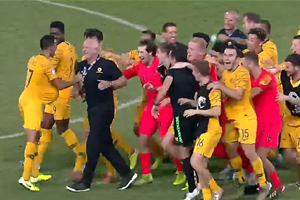 The Olyroos have qualified for the Tokyo Olympics after a 1-0 win over 10-man Uzbekistan in the third-place playoff at the AFC Under-23 championships.

It all simply clicked for the ultimate match. Baccus had a rather below par tournament heading into the third place playoff but he showed some of the form he's expressed at the Wanderers with a mature performance.

When Graham Arnold needed a hero, D'Agostino answered the call. He scored twice to get Australia the win against Thailand and wriggled his way through the entire Uzbek defence and finished with aplomb to send the Aussies to the Olympic Games.

A quiet game for the City midfielder who was replaced at half-time. Najjarine had decent spells when playing in this tournament and will no doubt be in contention for a spot in the Olympics squad.

Another quiet game for Bouman going forward although defensively he put in more of an effort making playing alongside D'Agostino a possible option as he linked up with the Perth forward superbly.

Arguably Australia's best at the tournament. Piscopo has laid down the gauntlet for Graham Arnold to be picked for the Copa America squad with his performances in Thailand.

Up to his old tricks again, helping Australia steady and maintain dominance on the ball.

A very good player to have on the bench especially when Uzbekistan went down to ten men.