Brandon O'Neill isn't letting a couple of tight matches get under his skin, he's on two wins in a row, after all.

Sydney took the lead through Brandon O'Neill in a dominant opening 15 minutes, but then to the surprise of pretty much everyone, Wellington proceeded to dominate the majority of the match.

It was only when Wellington's Mexican import Ulises Davila finally earned the Nix a breakthrough on the 69th minute that the Sky Blues restored some sense of control over the match, eventually garnering a lucky, looping winner through Rhyan Grant.

"First half an hour we came out and played some really good stuff and it was actually really good to see. We're not the finished product at all though, but we look really good going forward.

"It's only round two, we've picked up two wins. There's worse feeling to be honest.

"It's like the Melbourne Cup, you get ready, pick yourself up a couple of rounds in, and then peak when it's Grand Final time."

The loss means it's two from two to start Ufuk Talay's A-League coaching career, but there are serious reasons to be hopeful if you're a Phoenix fan.

This is the basically same squad of promising youngsters that so impressed under Mark Rudan last season, the experienced heads are still performing well and their imports - who have flown under the radar - seem top quality scoops. 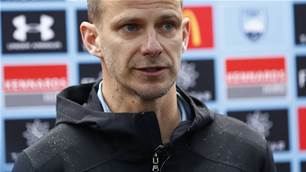