Victory will be firm underdogs against Sydney FC who enjoy an eight-point lead over Melbourne City at the top of the table, and have accrued 34 points to Victory's 15 from one less game.

But with skipper Ola Toivonen poised to start his first game since December, and new signing Marco Rojas in the squad, Salvachua said the meeting shaped as an important opportunity.

"They (Sydney) are in a really good moment now. They are doing really, really well - all the competition," he said on Thursday.

"And tomorrow will be totally different. At the end, it's 90 minutes, we are playing at home, we are Victory and you know with these kind of games, I don't know if one team or the other is favourite."

"They've got a lot of good players, especially in that front third as well and they have a new signing as well with Rojas," Sydney coach Steve Corica said.

"So they have a lot of quality players that we need to be ready and aware of."

With Thomas Deng away on international duty, Tim Hoogland out injured and James Donachie suspended (yellow card accumulation), Salvachua will have to reshuffle his defence, with Ben Carrigan potentially starting at centre-back alongside Leigh Broxham.

Victory have a hectic schedule over the next fortnight. They beat Bali United on Tuesday night, face Sydney on Friday and head to Japan to face Kashima Antlers on Tuesday. Victory will briefly return to Melbourne before travelling to Perth to face the Glory on Saturday week.

Corica said he expected Victory to press more intensely under Salvachua but his side needed to focus on getting their own game right. They welcome back Luke Brattan and Rhyan Grant from suspension.

"I think it's more about what we want to do and how we want to start the game," Corica said.

"It's always difficult when a new coach comes in, whether he changes things.

"So we've seen a couple of games that he's been in charge of now and we just work to what we see and we make sure we prepare right for the game and that's all we can do really."

* Sydney FC have won 10 of their past 13 A-League games against Victory (L3), including their past three featuring 10 goals

* Victory are undefeated in their past seven A-League games at AAMI Park (W5, D2), with a clean sheet in three of their past four there

* Victory (6) and Sydney FC (6) have scored more goals within the opening 15 minutes of games this season than other teams. 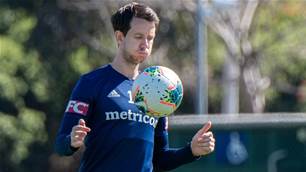