O'Rourke, who is now awaiting exemptions for the three Melbourne A-League clubs to enter New South Wales to continue, the season has copped a barrage of calls questioning his ability to remain as chief of leagues.

He described the events under his watch as like "losing two matches 6-0" and which sparked scorn from the football community and players on behalf of the Professional Footballer's Association.

But he said he bore all responsibility for the travel debacle plus the upset and anger it caused players and their families  - and he said he fully understood calls for his removal.

"I think that's fair and that's normal reaction," he said.

"I don't expect any other feedback and I also accept that's exactly what might even happen to be honest. It doesn't worry me.

"If you're in the sporting world and you get beat 6-0 and you're the coach, you might get away with it. If you get beat 6-0, two games in a row, then people are going to be calling for your head."

O'Rourke laid the blame for the mix-up and miscommunication of the last few days on himself.

"If anyone wants to have a crack at me, I take responsibility for that because the buck stops with me," he said. "I don't shy away from that all.

"If people want me to lose my role as leader of that, that's a possibility for others until that happens.

"If it happens i'm going to be solely focused on getting the exemptions, games back on the pitch, finishing the 27 games, the finals series and delivering the A-League.

He advised that the date for the A-League will resume as planned on July 16 and that if the Melbourne clubs do receive their exemption to enter New South Wales, they can still play their scheduled 'derby' matches against each other before travelling.

The latest the A-League can finish is August 30 under the current Collective Bargaining Agreement.

"The A-League is going ahead next week," insisted O'Rourke. "Two thirds of the games do not require the participation of Melbourne based teams.

"We will continue to roll with the season at this point in time we were due to start a game between two Melbourne clubs.

"They will play their games under the current regulations of the Victorian government. They are allowed to train and also allowed to play.

"I am very optimistic that the exemptions needed will be treated favourably by the NSW Government."

O'Rourke said he'd made a plan over the weekend to book a charter flight for the clubs out of Melbourne on Tuesday but had to bring those plans forward when informed the border would be closing on Monday night.

Despite twice failing to get the teams out of the state, O'Rourke said he remained committed to completing the 2019/20 A-League season.

"We still remain completely focused on not only finishing the regular season of 27 remaining games, but also bringing a final series," he said.

"We haven't given up. We won't give up and, if a door closes, we'll look to walk through another one." 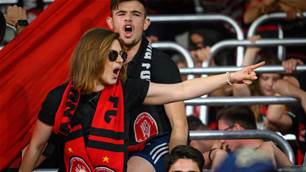