Matildas coach Ante Milicic believes patience will be the key in his team's Olympic qualifier against Vietnam, with a spot in Tokyo on the line.

Matildas coach Ante Milicic is expecting patience to be the key to overcoming a resilient Vietnam in Friday's Olympic qualifier in Newcastle.

Australia take on the world No.32 in the first leg of the qualifying playoff at McDonald Jones Stadium knowing a big win would all seal their spot at the Tokyo Games.

Having overcome Taipei, Thailand and China in their qualifying group last month, Milicic isn't taking anything for granted against the Vietnamese.

"Every opponent's different and we know this'll be a difficult game for us," Milicic said.

"It'll be one where we need to remain patient at all times.

"We saw in the last game where they played South Korea, they went to a more back five.

"So we expect them to defend deep, have a lot of players behind the ball, look to quickly counter in transition. 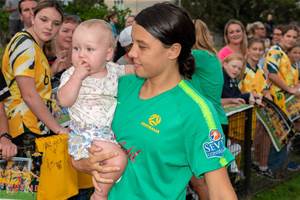 The Matildas turned on the smiles for fans in Newcastle after training for their crucial Olympic qualifier clash with Vietnam on Friday night - check out our pics!

"They've got a lot of speed on the flanks too, quite good technically, so we're expecting a difficult game."

"Each day Sam, Caitlin, Emily and Chloe - the four girls that travelled from Europe - are feeling better and sleep patterns back to normal so we expect everyone to be fit and healthy for the game tomorrow night," he said.

History is overwhelmingly on the Matildas' side with Australia having won all seven previous matches against Vietnam, scoring 37 goals and conceding none.

The return leg of the tie will be played on March 11 in Quang Ninh.