Perth Glory have snapped up former Socceroo left back Jason Davidson on a one year deal to bring him to the A-League for the first time.

Davidson was most recently on loan to Slovenian side Olimpija Ljubljana from Crotian club Rijeka after he was released early by Huddersfield Town.

The son of former Socceroo Alan Davidson, he has also represented Australia at Under-20 level before making his Socceroos debut against Scotland in 2012.

He featured in all three of the Socceroos’ games at the 2014 World Cup in Brazil, was a member of the 2015 Asian Cup-winning side and won 22 senior caps before falling out of favour.

Now he is targeting a return to international football via Perth Glory.

Davidson says he is excited to be working under a coach whose ambitions match his own.

“I spoke to Tony Popovic when I was overseas and the project that he outlined was very appealing to me and also for my wife and family,” he said.

“I want to get some consistency in my football, work hard and get back into the national team. I think Tony can give me that platform and I’m very excited to be here.

“I want to win titles and the quality of the players that have signed show that everyone here has that same intent.

“I’ve got to work hard and stay focused and I believe collectively, as a team, we can get the job done.”

“Jason is another high-quality, Australian defender who has forged a very successful career overseas and we beat off stiff competition from a host of clubs both here and overseas in order to sign him,” he said.

“He brings great ability, athleticism and a winning mentality." 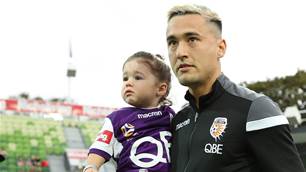