AMARAL, Hayden Foxe and Tando Velaphi will head the list of returnees for Perth Glory against Sydney FC this Sunday as Glory look to rebound from a disastrous start to the season.

Amaral was Perth's best and most creative player before injuring a hamstring and is a certain starter at Members Equity Stadium, with Velaphi also replacing Frank Juric in goals and Foxe looks set for his first game of the season.

The return of Amaral is something coach Dave Mitchell is particularly pleased about.

"Amaral has looked good and he will be starting. He brings us a bit of composure on the ball, he connects things for us to play through him and obviously they will think about marking him," Mitchell said.

"He's a competitor and not only is he a good player but he competes well for the ball, so it's good to have a player of that magnitude back."

Mitchell is also confident Foxe will be right to play to strengthen and add experience as a defender, while Velaphi has earned his start in goal and David Tarka and Adrian Trinidad could also be a chance to return to a Perth side under pressure and on the bottom of the table.

"Hayden has trained for part of this week and has looked good when he has. He is up for inclusion and he might play. We still have another training session tomorrow but he has looked good and hopefully he will play," he said.

"Tando has played before so he is confident, keen and looking forward to it. Tarka and Trinidad are also in contention to be selected but I won't name the squad until tomorrow and then we'll see who is in there."

Following a start to the season that has seen Perth win just once, the 4-0 loss to Melbourne Victory in their last start saw plenty of speculation surround the club, but now it's time to take the pitch again and Mitchell is looking forward to it.

"We have had a lot of meetings the last couple of weeks and the players are looking forward to the game. There has been a lot of talk about the support not coming for us but hopefully we get good support on Sunday and they get behind us to show that they want a Perth team in the league," he said.

"It has been a long two weeks, but a good two weeks. We have resolved a few things, have got our heads straight now and are looking forward to the game." 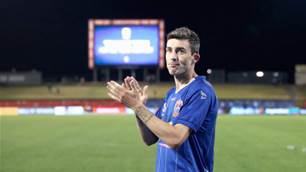