Melbourne Victory's stuttering start to the A-League season has continued, with Marco Kurz's side scrapping out a 1-1 draw with Wellington Phoenix at AAMI Park.

Ulises Davila's penalty handed Wellington the lead in the fifth minute before Ola Toivonen earned a point in the 66th minute.

Victory's day got off to a horror start, conceding from a penalty inside five minutes.

A seemingly innocuous corner from Callum McCowatt struck Toivonen on the arm in the second minute, with referee Adam Kersey initially waving away the contact.

After a VAR review, the penalty was awarded, with Ulises Davila powering his spot-kick past Lawrence Thomas to give the Phoenix a 1-0 lead.

"During the pre-season we had an appointment with referees - we learned in this moment like Ola was, it isn't a penalty," Kurz said.

"But the referee decided to give the penalty and then we have to respect it - I cannot change it.

"I think it was not an active movement with Ola's arm to the ball - it's a corner, a lot of players are in front. I was a defender as well and what can you do better? I think the hand is close to the body.

"But I think we have to respect the situation but I'm not happy about (it)."

Victory largely lacked creativity and struggled to make genuine chances throughout the opening half.

The home side finally hit back in the 66th minute through a moment of individual brilliance from Toivonen.

Tim Payne's shallow clearance fell to the Victory skipper, who stormed through the box and brushed off Taylor before finishing with aplomb.

It gave the home side the impetus they needed, and they controlled the game from there - but without reward.

Victory almost took the lead in the 78th minute when Storm Roux went on a charging run down the right flank, slipping the ball to Elvis Kamsoba.

The winger cut the ball back to Toivonen, whose shot forced a Stefan Marinovic save.

Toivonen had another shot flash wide in the 80th minute, while Thomas denied Alex Rufer with a commanding save in the 87th minute - with both sides forced to settle for a point.

"The first half performance for me was very good but second half we gave the ball away - we turned the ball over too easily at times when we won it but we still created opportunities in transition and on the counter to score and win the game," Phoenix coach Ufuk Talay said.

"But at the end of the day, you come to Victory and you get one point, you're quite happy with that." 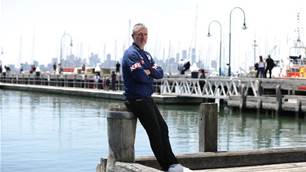