Pierce Waring says he's not getting carried away after making his A-League debut off the bench for Melbourne Victory on Saturday night.

The Big V downed Adelaide United 3-0 at AAMI Park as Besart Berisha sealed the game on the hour mark and in the 86th minute the Kosovan made way for Waring.

A number of Victory’s youngsters have had game time this season including Christian Theoharous and Josh Hope, however Waring has had to compete with Berisha and Kenny Athiu in the striker role.

Waring was kept waiting on the sideline before getting his chance, almost assisting a Terry Antonis shot and now the 19-year-old was keeping his feet on the ground.

“Support is always nice, but for me, this is just the beginning. I’m not going to get carried away, it was just my first game,” Waring told FourFourTwo.

“Hopefully it’s just the beginning and there’s a lot more to come. I was a little bit nervous, but they were good nerves.

“I was really happy to get out there and make my debut, I’ve been waiting a while to come on, so it was a really good feeling to get out there. I wanted to get a goal… hopefully they’ll start coming. 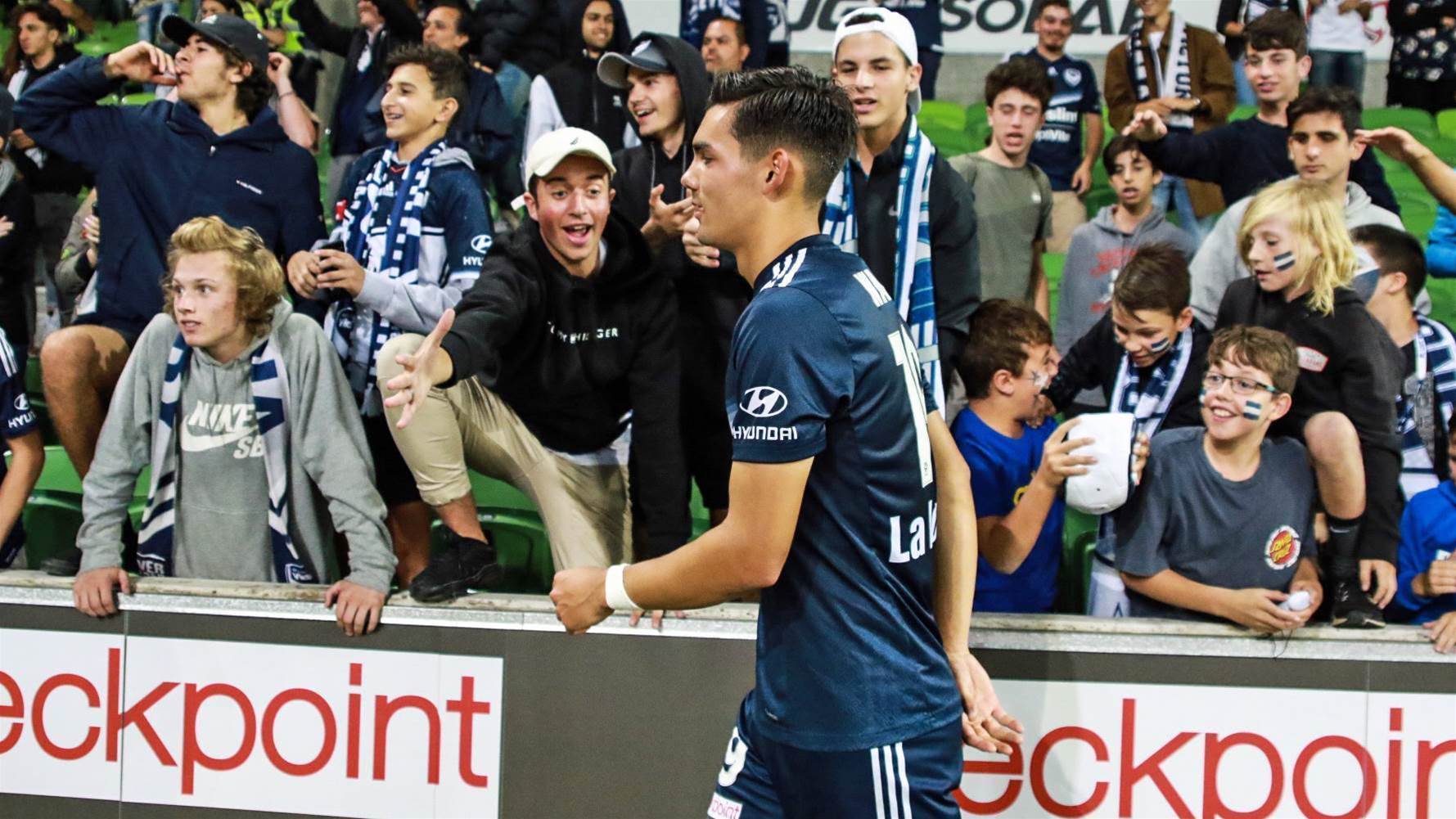 The Victory fans get around Waring after making his debut. By Ashley Perez Photography

“It’s one of those ones where you’re just waiting and waiting to get on, but I was just focused. Once I got on, you kind of just forget about everything and the boys helped me quite a lot because I train with them every day.

“It feels comfortable and the crowd was great, it was a good feeling and the nerves went away as soon as I started playing.”

Waring has had an interesting journey so far, his mother is Japanese and his father is Australian.

Born in Melbourne, the teenager left for Shanghai when he was just two-years-old, as his parents were working in China, then he left for Japan for another four years.

Waring had experience with a current J-League 2 side Avispa Fukuoka where he was part of the youth academy. The striker then moved back to Melbourne in 2008 to focus on his studies.

Waring played with Nunawading City and subsequently got picked up by Victory’s youth team, playing under John Aloisi. 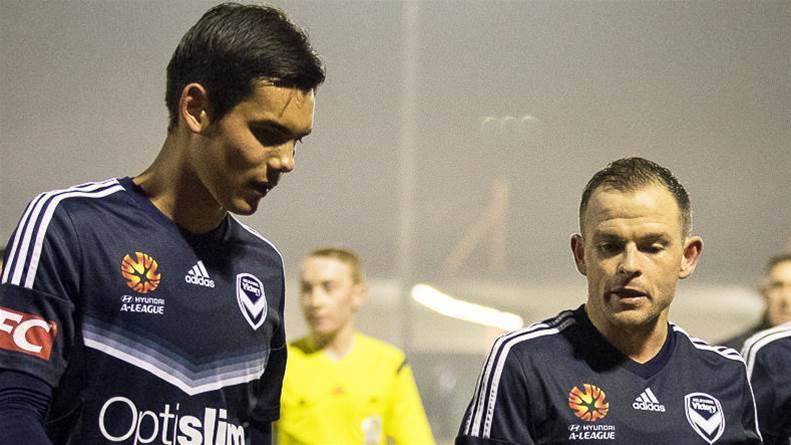 He also represented the Joeys in the 2015 U-17 World Cup in Chile alongside Hope and Daniel Arzani, where he played all three games and scored in their 4-1 loss to Germany in the tournament opener.

Waring admitted there weren’t too many Australian strikers coming through the ranks and revealed he had some big targets to shoot.

“For me it’s lucky because there aren’t a lot of strikers around, it’s definitely one of my long term goals to play for the Socceroos,” he said.

“For the time being, I think I have to put my head down and work hard. Hopefully get some more games in the future and more goals to come with it.

“To be honest as a young boy, you’ve always got to be ready with any club game, especially this season, we’ve had the ACL (Asian Champions League) and we have a lot of games in the next two months.

“Some of the young boys played last week and there was an opportunity for me this week, so it’s just up to me to be ready all the time in case I do get a call-up.” 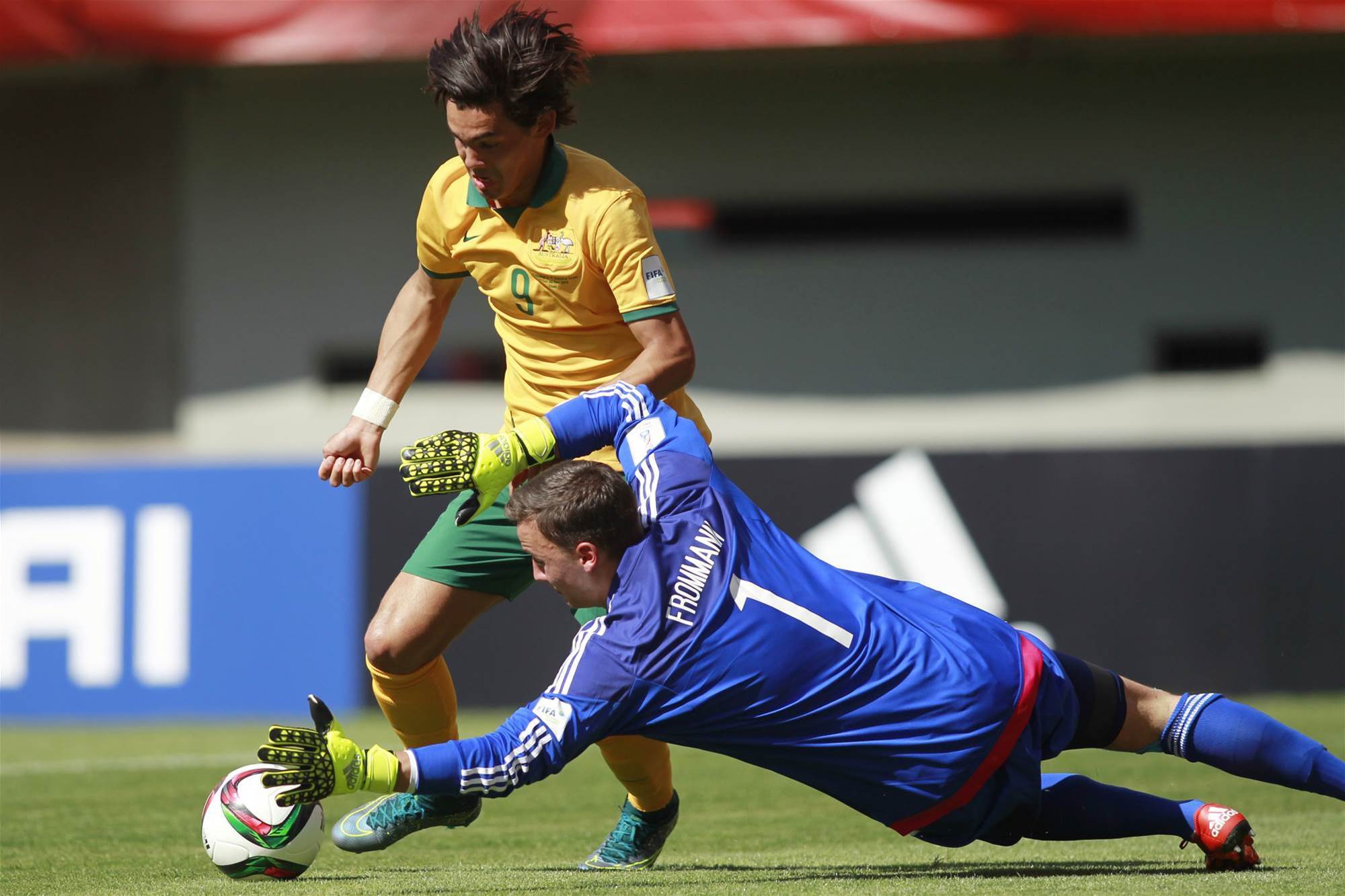 The 2017 National Youth League (NYL) golden boot winner also said he was enjoying every minute of his time with Victory.

“I’ve been training with the boys for quite a while, but this is my first official season. For me, signing here, they’re probably the biggest club in the A-League,” Waring said.

“There are a lot of superstars, there are a lot of big players, it makes it hard for the younger boys to get an opportunity, but at the same time it’s great to learn off the best players in the A-League.

“You can learn a lot just from training with them and it was great to go out with them on Saturday night.”