THE HOME of Central Coast Mariners has been named the best playing surface in the A-League while Wanderland has the perfect atmosphere, say players in a new poll.

The PFA Stadium Ratings show an overall improvement in pitch quality and atmosphere for the opening 12 rounds of this A-League season.
Aimed at ensuring first class playing surfaces and acknowledging the important role played by fans, the PFA Stadium Ratings System monitors the pitch quality and atmosphere of all A-League matches.
Voted on by the opposing team captain at the end of every A-League match, the PFA Stadium Ratings measure the pitch quality by rating the smoothness, pace and hardness of the playing surface and the atmosphere created at the stadium.
Despite being one of the poorer surfaces last season, Bluetongue Stadium received the highest rating with an average score of 4.33, just ahead of the Western Sydney Wanderers home ground Pirtek Stadium, which had an average score of 4.13.
Central Coast Mariners defender Zac Anderson hailed the turnaround.
“The surface at Bluetongue now makes it possible to play football of the highest quality and the improvements that the ground staff have made to the pitch have been noticed and we are very thankful for their efforts,” Anderson said.
“Everybody wants to see good quality football in the A-League and the playing surface can have a huge impact on the quality of the match. If the pitch is bumpy and uneven simple things like controlling the ball become much more difficult and the game suffers as a result.
“From a players perspective as well it is very difficult to go out and perform at your best if you are worried about being injured due to a pitch that is not up to standard.”
Bluetongue Stadium Curator Geoff Ellis said he and his staff took great pride in providing the players with the best possible surface.
“We are always asking the players for their feedback and the PFA Stadium Ratings System is something that has given us plenty of insight into what they are after,” Eliis said.
“It is great to hear that we are providing the players with a surface where they are able to play to the best of their abilities.”
The improvement at Bluetongue Stadium was reflected in the majority of playing surfaces throughout the A-League with last season’s average pitch rating rising from 3.48 to 3.69.
PFA's Kliment Taseski said many clubs were now using the ratings system as they sought to have the best possible playing surface.
“We are now regularly contacted by ground staff from many of the stadiums who are eager for feedback from the players,” Taseski said.
“Geoff Ellis and his team at Bluetongue have taken a keen interest in the PFA Stadium Ratings and have obviously worked extremely hard to address any of the issues the players have had previously with the surface.”
The atmosphere at Western Sydney Wanderers’ home ground Pirtek Stadium was acknowledged by the players as the best in competition so far this campaign recording a perfect five out of five average ranking.
Melbourne Victory home games at AAMI Park was rated second behind Pirtek Stadium with a rating of 4.33 followed closely by Sydney FC’s home ground Allianz Stadium with a rating of 4.07.
The overall atmosphere throughout the competition also showed an improvement with last season’s average of 3.27 rising to 3.33, with six clubs ahead of their last season’s average. 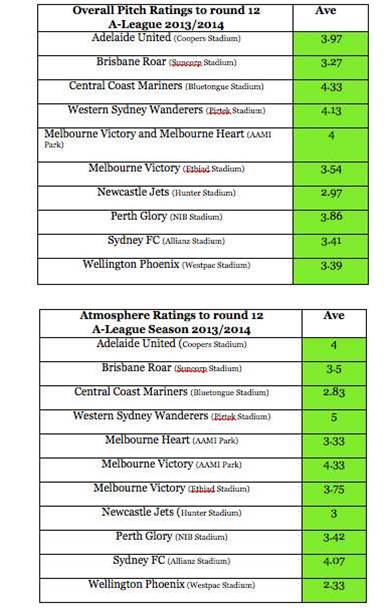