The FFA has invited players to provide input into the short and long-term future of the A-League after concerns about a lack of clarity from league bosses.

A-League players are being urged by league bosses to speak up after expressing frustration over a lack of clarity over the competition's future.

Former Socceroo Tommy Oar, along with veterans Liam Reddy and Nigel Boogaard, have all publicly expressed their concern players were being left in the dark about the state of the A-League.

All three are at clubs in the Central Coast, Perth and Newcastle where players and staff have been stood down without pay since the league was suspended due to the COVID-19 crisis in late March.

In response, FFA chief executive James Johnson says he would welcome players to make sure their voices are heard and to offer their opinion on the way forward for the league.

"We're certainly open to more and more dialogue, of course with the PFA, but also directly with the players. We welcome that," Johnson told AAP.

Almost half of the A-League's contracted players are set to have their deals expire on May 31.

Johnson concedes the looming expiration of so many contracts adds an extra layer of complexity to the resumption of the league.

While FIFA has issued guidelines for competitions to negotiate short-term extensions to contracts, Johnson admits teams may not have the same squads when the 2019-20 A-League season resumes.

"It's effectively another transfer window, you could look at it that way," he said.

"We obviously would like to keep as many of the existing players as possible, but you have this issue where our contracting year is 31 May to 1 June and the season will of course extend beyond that point.

"This would necessarily require a negotiation with the players themselves through the PFA and as soon as we're closer to getting on the pitch those discussions are going to need to take place."

Johnson is also not concerned the A-League could suffer a talent drain as overseas competitions such as South Korea's K-League prepare to return to action.

"Our borders are closed. Most countries around the world, their borders aren't open," he said.

"I think it would be difficult for, not just players, but anyone to move abroad at the moment for employment opportunities." 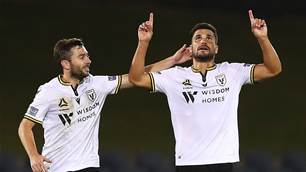