Any hopes Melbourne City had of overhauling Sydney FC to re-take the first position on the A-League table ran into a Perth Glory shaped brick wall on Friday night.

Goals from Bruno Fornaroli and Tomislav Mrcela combined with an own-goal from a disappointing Harrison Delbridge - who was also beaten on both Fornaroli's and Mrcela's strikes - to fire Glory to triumph.

The game was a marked turnaround from Glory's 1-0 defeat against Victory at the same ground the week prior and remarkably, after entering the round bottom of the table, the win - at least temporarily - moves them into the six.

It is, of course, tempting to declare that Fornaroli turned in a match-winning performance to set the table against his former side.

It’s a scenario that writes itself: a scorned City hero avenging the humiliation suffered under former-Head Coach Warren Joyce and showing that he demonstrably does still possess the ability to win you a game at an A-League level.

Real ‘you didn’t want him’ areas.

Such a view, though, would be sacrificing accurate analysis for the sake of storyline drama.

For the all-important 50 minutes before his side took a prohibitive two-goal lead, Fornaroli’s impact beyond his well-won headed goal was largely similar to the influence that the man that replaced him atop City’s line.

Both the Uruguayan and Jamie Maclaren toiled with less than ideal service throughout the opening half at AAMI Park as they sought to turn half-chances into goals and chasing valiantly in an attempt to pressure their opponent's defence into making mistakes.

Neither man received much in the way of assistance from their midfield throughout the contest but, while Fornaroli’s dearth in opportunities can in some way be attributed to his side’s lack of the ball, Maclaren’s lack of service was born of City’s inability to break down their opposition.

Against Glory’s stout defensive setup, Erick Mombaert’s much-vaunted inverted fullbacks only served to narrow the pitch as his side attempted to move the ball from defence to attack.

As a result, City’s efforts to get forward in attack often descended into pumping balls forward in the vain hope that Maclaren or wingers Craig Noone and Javier Cabrera would be able to produce an individual moment of brilliance.

Maclaren is good but, at 177cm tall and going up against 181cm tall Alex Grant, 192 cm tall Gregory Wuthrich and 195cm tall  Mrcela, he’s not going to do a lot with long balls forward.

After  Delbridge – who had his worst game in a City shirt since his inauspicious opening months at the club – inadvertently turned in an off-target shot from Wuthrich in the 47th minute the game looked it all sealed - City in no shape or form looking capable of staging a comeback.

The ‘all but’ qualification was then removed in the 71st minute when Mrcela made it three.

Thanks to their strong early-season run of form, City will retain second place on the ladder following tonight’s contest as third-placed Adelaide United entered the round four points back.

However, lessons will need to be learned ahead of the round 10 visit to Newcastle Jets to avoid the scenes from Friday night occurring again.

Last week, Victory perhaps provided a clear insight into how to beat Perth when they sat off, allowed the West Australian’s to soak up possession and hit them on the counter. On Friday, City did the opposite and was made to pay.

On Thursday, Mombaerts had warned against possession for possession’s sake – explaining that teams didn’t need to have the ball to win football games.

On Friday, his side learnt that the hard way. 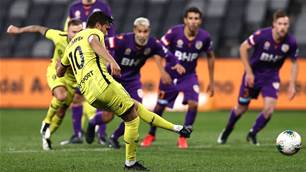