For the second time in his coaching career, ex-Socceroo Tony Popovic has found himself ruthlessly terminated from a job in Europe after just nine matches at the helm.

Greek second division outfit Xanthi FC announced they had dismissed Popovic just nine games in to the season, with the club fifth on the ladder after a run of three wins in their past four fixtures.

His dismissal follows ex-Melbourne Victory boss Kevin Muscat getting the sack from Belgian top tier side Sint-Truiden in December after just 14 games in charge.

Popovic, who has enjoyed great success as a head coach in the A-League, has now twice failed to reach 10 league matches in a coaching role in Europe after an ill-fated stint in Turkey with Karabukspor in 2017.

"Having that Australian passport means we have to start at the bottom," the J-League winning coach told Optus Sport.

"I know that is not going to deter the likes of Popa and Muscy and I have no doubt they will eventually work their way up.

"They have the years ahead of them. I will be super pleased to see them one day coaching at the highest level."

While Muscat is probably hopeful his record during his six-season spell in charge of Victory will land him another chance in Europe, the future is less clear for Popovic.

Having returned to Australia after his Turkish nightmare, Popovic rebuilt his reputation at Perth Glory, landing the club an inaugural A-League premiership in 2018-19 and another finals appearance the following season.

Popovic's exit also casts doubt over a several Australian players who followed the former defender to Xanthi under Greek-Australian club owner Bill Papas' stated intention to make the club a pathway to Europe for A-League talent. 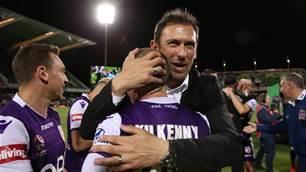