Ange Postecoglou has left quarantine and already watched his first match and the Aussie coach is very bullish about the exciting work to come.

Postecoglou linked up with Celtic's CEO Dom McKay to watch Scotland draw against England at Wembley and is due to take his first training session next week after leaving quarantine.

Celtic have friendlies next month against Sheffield Wednesday, Charlton, Bristol City and Preston before their first real test, a Champions League qualifier against FC Midtjylland.

“It’s obviously a very significant fixture for us and it comes pretty early,” Postecoglou told the Celtic View Podcast. “It’s exciting for me, for the players and the whole club.

“It gives us a target now that the pre-season is about to start and I’m looking forward to it. Those great nights in Europe are what Celtic are all about so hopefully we can create more magic this year.”

Postecoglou said that he's pleased with the work he's been able to do while in quarantine, with the coaching staff already putting in place a series of changes to embrace the Australian's philosophy.

“I’ve been hard at work already and it’s been great to connect with everyone at the club and get to know everyone,” he said.

“I’m keen to hit the ground running and try to get as much work done before I get there, but my own view is that we can’t be more prepared than what we are at the moment in terms of the conditions we’ve had to face.

“I’m fully confident that once I hit the ground, we’ll get started and I’m really excited about the fact that we’ve got something to look forward to and a bit of a target there over the next four or five weeks.

“The work’s already started, to be fair. A lot of the lads, the staff at the club, are already putting plans in place. I’m talking to them daily so they kind of know how I want us to work.

“There’s a lot of work been done already and certainly, in the first few days, the staff there are really keen to set the new tone and the agenda that I’ve got. So I think the players will feel a difference straight away, but, obviously, for me, the real impact will come when I get there and I can talk to people.

“The target is that first Champions League game, but we’ve got a lot of work to do before that. We’ve got some fantastic friendly fixtures and warm-up games to prepare for that, and training as well, which will be the key part for us.”

Postecoglou's first serious test against the Danish club will mean he comes up against Socceroo Awer Mabil, a challenge he's looking forward to.

“He’s been there for quite a while and because of that I know the club quite well. I’ve followed his progress and the club’s progress, and it’ll be great to see him again because, as I said, he’s a great young talent."

Celtic have registered their interest and are preparing a contract package for Socceroo Mat Ryan, while Arsenal are reportedly beginning to look elsewhere.

Former Melbourne City and Western Sydney Wanderers A-League star Kearyn Baccus is in the semi-final of the CAF Champions League with Kaizer Chiefs.

Western United have parted ways with six experienced A-League players as the club seeks to refresh its squad.

Sydney FC A-League fans recorded themselves setting off a fireworks display in front of Adelaide United’s hotel at 3am, before the two clubs face off in their semi-final tonight. 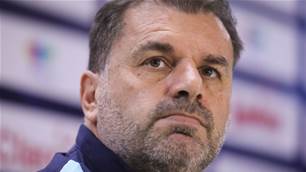